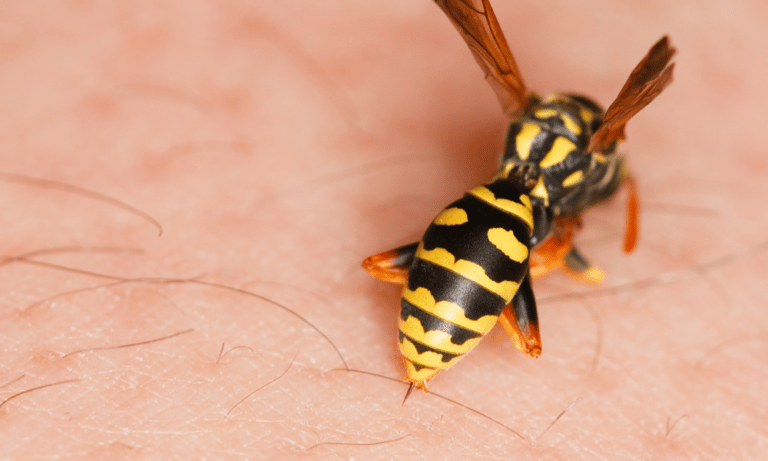 Nothing is scarier than an angry swarm of wasps coming at you at full speed. Wasps have a terrible reputation. Wasp stings can hurt a lot and they can repeatedly sting you, but can wasps kill you?

Yes, wasps can kill you, but the chances of someone getting killed because of a wasp are extremely rare. They would need to sting you around 1,000 times!

People know very little about wasps; they usually know that wasps sting and are aggressive creatures. However, wasps aren’t always harmful and are, in fact, beneficial creatures; they pollinate flowers and get rid of annoying pests.

This doesn’t mean you should be fearless around a wasp.

Wasps can get hostile very quickly, especially regarding their nest. Wasps are territorial insects that don’t take kindly to any intruders.

When they get provoked or feel threatened, they repeatedly sting, unlike a bee that can only sting once. Wasps often release pheromones when provoked, and these pheromones call other wasp troops to come and sting you.

You can die from a wasp sting, but this is extremely rare. Wasps are tiny creatures; no matter how bad their sting hurts, chances are high that you can survive.

The chances of someone dying because of a wasp have two reasons; a large swarm of wasps repeatedly stung the person, or the person had an allergic reaction to the wasp sting, resulting in his demise.

Wasps can sting multiple times, which a bee cannot, making them much deadlier than bees. A bee can only sting once because it has a barbed stinger that sticks into the victim and rips apart when it injects its venom, killing the bee.

A wasp doesn’t have this.

A wasp sting can be lethal if it has stung a person allergic to wasp stings. Another instance where wasp stings can be deadly is if it’s with a large swarm and all the wasps in the swarm are continuously stinging the same person several times.

Even a single sting can be deadly if it results in Anaphylaxis. This rare occurrence can only happen if the person has an allergic reaction to the wasp sting.

Anaphylaxis is an extreme allergic reaction that results in the body’s defensive systems suffering from several symptoms such as overreacting, getting into shock or even completely shutting down.

We should only be vigilant and not bother a wasp when we see one or go near a wasp’s nest to avoid getting stung.

How Many Wasp Stings Can Kill a Human?

Too many wasp stings can be fatal; a person getting repeatedly stung by a large swarm of wasps can be dangerous and deadly, but exactly how many stings are too much?

How many stings and wasps will it take for someone to die?

Generally, it’s assumed that a healthy adult can survive around 1,000 stings. 1,000 stings seem like a lot, imagine how painful it will be getting stung 1,000 times by a swarm of wasps, but still, even such a high number of stings is survivable.

This gives you an idea that humans are pretty strong and durable against tiny creatures, no matter how fearsome they may be. Therefore, you shouldn’t be too afraid of wasps.

Anytime you get stung or hear someone else getting stung, it is always once and twice in very unlucky and rare scenarios.

People hardly ever get stung five or six times, and even if a whole swarm attacks them, getting stung 100 or even 10 times is extremely rare, so it is clear that getting stung 1,000 times seems impossible.

Regarding pets, dogs often get stung due to their curious nature and because they love being outdoors.

Wasp stings are generally harmless to pets, and one sting would be completely harmless to a cat or dog. Most pets’ reactions to stings are often mild, and your dog or cat will only feel uncomfortable, and the area where they got stung would start to swell. The symptoms will go away after a day or more.

However, the situation can get serious if a cat or dog gets stung in any sensitive area.

For example, if your pet was stung in its throat or neck, it could have difficulty breathing and might have a chance of dying. Contact the nearest vet ASAP if you suspect your pet has been stung on any sensitive areas.

Can a Swarm of Wasps Kill You?

Wasp stings, as mentioned above, aren’t serious; they may cause intense pain and swelling, but the possibility of dying from a wasp sting is extremely rare.

A human being has a chance of dying from a wasp sting if stung over 1,000 times or if the sting causes anaphylactic shock.

Both are extremely rare, so chances of death by wasps are very rare. Most people only get stung once or twice.

Do you still have questions about wasps and their ability to kill? Check these FAQs out:

Yes, there is a chance a wasp could kill a baby were it to sting a baby multiple times. But it would need to be consistent stings. It is highly unlikely that a wasp could cause lethal harm to a baby.

A wasp is more dangerous than a bee because it can sting several times. However, it’s infrequent for a wasp to kill a person, and the chances of someone dying from a wasp sting are almost impossible.

For pets, a wasp sting will only cause swelling unless it stings them in sensitive areas; then, the situation might get serious.