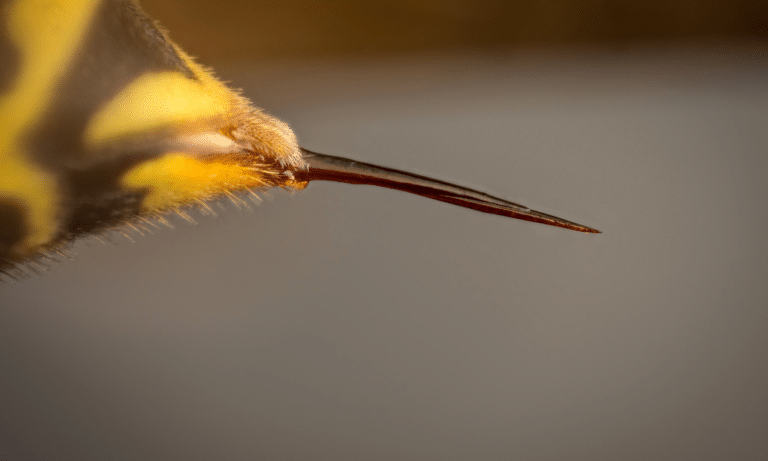 As you probably know, cats are interested in insects and they like to catch them. But this curious nature can be harmful to them if the insect in question decides to fight back. So, can wasps sting cats when cats try to chase them?

Yes, wasps can sting cats. Unfortunately, it is not rare for cats to get stung by wasps, especially during the warm summer months.

If you know one thing about wasps, they sting badly!

When cats are exploring, they can often disturb a wasp or intrude on a nest. This is quite dangerous as the wasps can sting the cat’s entire body since the insects roam in swarms.

Why Are Cats Likely to Get Stung by Wasps

Cats are curious by nature, making them more susceptible to wasp stings. Wasps are small in size and make swift movements which can cause cats to assume they are something to play with.

Wasps activate that curious instinct in cats that makes them want to explore, catch, and investigate. This playful behaviour causes wasps to sting cats in self-defence as they believe they are in danger. Of course, the cat is just playing but the wasp doesn’t know this.

It is common for cats to get stung when the weather is warm during the summer days. This is when your garden will have wasps, or they may enter your home. It is quite common for solitary stings to happen.

However, a cat can suffer from multiple stings, which is quite painful if it disturbs the wasp’s nest. This is why it’s vital to remove a wasp’s nest as soon as possible and to keep your pets away from it in the meantime.

Can a Wasp Hurt a Cat?

Since cats love to sniff around and explore, they often find themselves in dangerous situations. Therefore, a cat may chase around a wasp, or worse, meddle with a wasp’s nest. In this case, wasps will attack the cat in swarms and sting it all over the body.

Wasp stings are quite painful and can hurt cats. It is not only the sting that can hurt cats, but the venom can also be lethal. In most cases, cats become seriously ill as it can cause an extreme drop in their blood pressure.

If you know that your cat has been stung by a wasp, it is best to contact a vet immediately. The vet will guide you to do what is best for the cat and recommend certain treatments.

What Happens If a Cat is Stung by a Wasp?

Fortunately, when cats get stung by wasps, it is not a serious case, in most cases. However, you need to provide urgent care if the cat gets stung in the neck or mouth. Some cats are also allergic to stings, and if they are, it can result in an anaphylactic shock.

If a cat gets stung by a wasp and has an allergic reaction, you will not realise immediately. If you know your cat has been stung and it is the first time then it is best to keep an eye on your cat for at least 24 hours.

It is important to determine if the cat has been stung by a bee or wasp. You can tell by the severity of the stings and how the cat reacts to them.

It’s also worth remembering that the severity depends on where the cat gets stung. For instance, getting stung on the mouth, neck, or throat can result in difficulty breathing for the cat.

What to Do If My Cat Gets Stung by a Wasp?

It is important to know what a wasp sting looks like so you can help it. Cats will react differently to wasp stings as some can be allergic to the sting. Therefore, when a cat gets stung by a wasp, you need to look for certain symptoms that indicate that it has allergies towards stings.

Some of the signs you should be looking out for include weakness, vomiting, difficulty in breathing, diarrhoea and swelling around the bite area.

If you notice that your cat is showing some of these symptoms, it is important to get the help of a professional as soon as you can.

When you find that your cat has been stung, the first thing you should do is to remove the sting. You will have to scrape out the sting using something like a credit card. Do not squeeze the sting or pull it. You should not be applying any pressure to the sting as it will release venom and cause further irritation.

The next step is to hold something cold against the sting. The best thing you can do is take a towel that you have run under cold water.

Remember, you should look out for any allergic reactions. Usually, the allergic reaction will appear within an hour of getting stung. In this scenario, it is important to get a vet involved.

A cat’s skills and playful behaviour can cause them to be susceptible to wasp attacks. Wasps can sting cats, which, unfortunately, is quite common, especially during the summertime.

Solitary stings can happen, but multiple stings are painful and will occur if cats disturb the wasp’s nest,

If a cat gets stung by a wasp, it may suffer an allergic reaction. Symptoms include swelling, difficulty breathing and vomiting. It would help if you kept an eye on your cat during this time. If you notice any symptoms then contact a vet immediately.