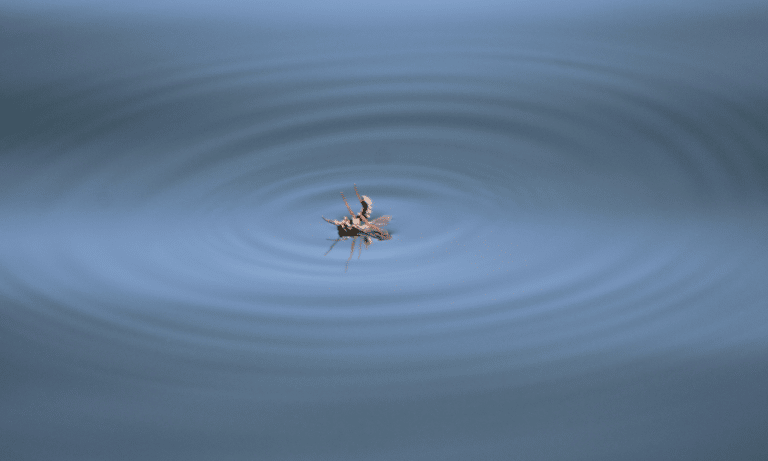 Wasps don’t drown when it’s raining. You can even see them flying around in light showers. So, does that mean that wasps can swim? Or will they drown in pools of water?

Most types of wasps aren’t able to swim, but a small 0.3% of all wasp species are aquatic and can swim using adapted claws.

Wasps are strong enough to survive large water droplets being dropped on them in heavy rainfall, but still, most species aren’t capable of swimming and will most likely die of starvation or drowning if they ever found themselves in a pool of water.

However, 0.3% of wasp species are aquatic creatures and have learned to swim with the help of their adapted claws. Wasps are light, so they can easily float on water.

Wasps that can’t swim can close their spiracles and reduce activity, allowing them to survive for several days in water without needing oxygen. They can’t swim but that doesn’t mean that going in the water is lethal.

Which Species of Wasp Can Swim?

There are only 0.3% of wasp species from the total wasp population known to be aquatic and can swim underwater.

One of these aquatic wasp species is called the Godzilla wasp. The name has been given to it because of its similar aquatic nature to the fictional Japanese monster called Godzilla, which also swims underwater.

The Godzilla wasp has certain physical advancements for swimming underwater; it has curved long claws helping it swim through the surface of water and even allow it to dive underneath it.

The Godzilla wasp hunts and feeds on aquatic species of caterpillars that are found on the surface of the water.

Unlike most caterpillars that are squishy and soft, these have a hard shell to protect them from predators that can try to catch them from above in the air. Wasps are strategic and intelligent creatures. The Godzilla wasp swims underneath the caterpillar to attack and eat it.

Can Wasps be Drowned?

Wasps are tough insects, and they can survive even days without oxygen. Despite their size, they’re pretty resilient and don’t die that easily to climate and harsh weather conditions.

Wasps can breathe like every living thing, but, unlike mammals and most other creatures, they don’t possess lungs.

They breathe through tiny holes found on their abdomens, known as spiracles, instead of breathing through their mouth or nose, which they also don’t possess.

Wasps don’t have mouths or noses. Their mouths are replaced with two pairs of mandibles mainly used for crushing prey and eating. Their noses are replaced with antennae, a multipurpose organ that allows the wasp to hear, smell, and feel.

To avoid drowning, wasps close these holes so water doesn’t pass into their bodies. They also can hold their breath effectively. They can shut down for hours or even days.

As they’re able to close their spiracles and have a low metabolic rate, they’re very successful in holding their breath for long periods. Their efficiency in storing and utilizing oxygen allows them to survive without it for days.

Closing their spiracles stops water from entering their bodies and prevents oxygen from escaping.

Wasps in the water for too long may seem dead, but in reality, they have just shut their bodies down and will come around eventually after some time.

How Long Can a Wasp Hold Its Breath Underwater?

Wasps breathe through tiny holes called spiracles present on their abdomen, as mentioned above. They have a low metabolic rate and can close their spiracles to stop water from entering and oxygen from escaping.

They know when to store and utilize oxygen. This allows them to survive underwater without oxygen for several hours and even days. They can completely shut down for days.

Wasps, despite their small size, are very good at holding their breath.

Want to know more about wasps, water and their ability to swim? Then check these FAQS out:

Wasps do not require water to live but if they’re particularly lacking in fluid then they will drop down to the surface of water and quickly slurp some. Most wasps have a straw-like proboscis which they use to take in liquids.

No, ponds themselves will not attract wasps. However, wasps eat plenty of small insects that might be drawn in by a pond. This means a pond could, indirectly, attract wasps.

Most species of wasps are not able to swim. But this doesn’t mean that water is dangerous. In fact, many wasps can survive in the water for several days, shutting their body down to survive. It’s worth noting that 0.3% of all wasp species are, in fact, aquatic meaning that they live in or around the water.