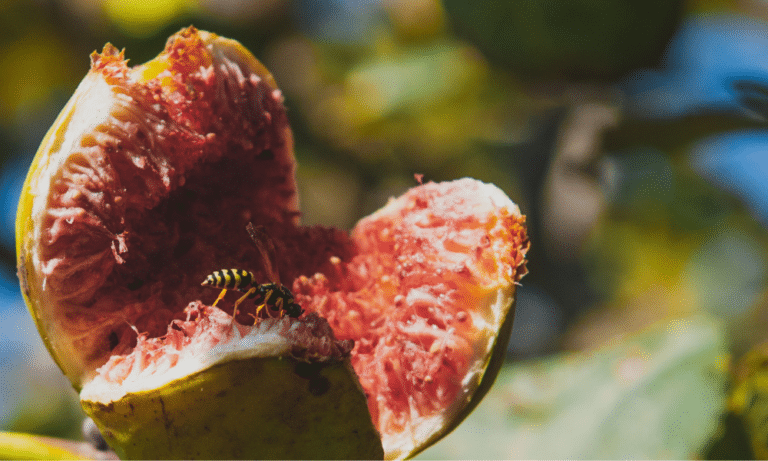 Figs grow on Ficus carica, which is a small tree in the plant family called Moraceae. It’s widely grown all over the world for its juicy sweet fruit. Figs are also famous for another thing which makes them a lot less appetizing: Wasps. But, do figs have wasps in them or is this a lie?

Figs are pollinated by wasps, and a wasp may end up inside them. This happens when a female wasp crawls through a narrow and tiny hole in the fig. As the hole is too narrow, the wasp loses its wings getting inside it.

Without any wings, the wasp is now trapped inside the fig.

If it’s a male fig, then the wasp lays eggs inside, and when the larvae hatch, they burrow out of the fig. The larvae transform into adult wasps, carry the fig pollen, and fly away.

If the fig is female, the wasp pollinates it but cannot lay any eggs inside and simply dies. In this case, you may find a dead female wasp in your edible fig.

Do All Figs Have a Wasp in Them?

Generally, only the female fig is found with dead wasps in the edible fig. It can’t lay eggs in the female fig but can only pollinate it. If the fig is male, then it can lay eggs. The larvae burrow out and turn into mature wasps to take the pollen from the male fig into the female fig.

In other words, the fig eats and digests the dead wasp!

It becomes a part of the resulting ripened fruit. When you eat a fig, and you taste something crunchy, don’t worry, as it’s not a part of the wasp. It’s just the seeds.

Farmers also help to keep the wasp numbers to a minimum that go inside the figs. Fig ripening relies on wasp pollination, but if there are a lot of wasps pollinating the fruits, it will cause over pollination.

Over pollination causes an overabundance in the number of seeds, and if there are a lot of seeds, the fruit-like syconium can burst open. This is, however, good for the plants but for the farmers, not so much, as it significantly reduces yields.

To avoid this damage, farmers put male and female plants very far away from each other. The supply of wasps that are supplied by the farmers is also controlled and low in numbers. This results in only a few wasps going inside the plants when harvest time is near.

Do Figs Have Larvae in Them?

When a female wasp goes inside a female fig, it’s unable to lay any eggs but can pollinate it. After pollinating the fig, the wasp dies alone trapped in the fig, but the fig eats and digests it.

This way, you neither can find any larvae nor an adult female wasp in the female fig, so you don’t have anything to worry about.

In the case of a male fig, the female wasp gets trapped inside it just like in the female fig, but in the male fig, the wasp can lay eggs. However, after these eggs are hatched, the larvae burrow outside the fruit and grow into mature wasps taking the pollen with them while they fly off.

So the male fig has larvae in it, but the larvae hatch and help the fruit in pollination and go away from the fruit. The fruit also ripens this way.

You may not find larvae in the male fig either, but there’s a chance you may find a dead female wasp because, unlike the female fig that can digest the wasp carcass, the male fig cannot.

Can Figs Exist Without Wasps?

Figs cannot exist without wasps, as wasps are hugely important for figs to be pollinated. Figs may be considered a fruit, but they’re also an inverted flower. The fig blooms in the fig pod that’s attached to the fig plant.

Flowers can only reproduce when they’re pollinated, and figs are majorly dependent on wasps to pollinate them. Wasps are so important because as the fig’s flower is hidden inside, the insect that’s pollinating it will need to crawl in the fig to carry the pollen to the flower.

It’s found in the fig flower, where female wasps are known to lay eggs.

If there are no fig plants, the wasps won’t be able to lay eggs, and if there are no wasps, there would be no insect to burrow in their fruit and lay eggs so their larvae can carry their pollen.

Many fruits seem to have either an insect in them or an insect larva, but figs are the most commonly known fruit to have this.

A lot of people have found a dead wasp in their figs, and it’s mainly because the wasps, during their pollination of the plant, are unable to escape the fruit, so they either lay eggs and pollinate and die when everything is done.

The wasps break their wings when they’re laying eggs in the male fruits as female fruits are pollinated, and no eggs can be hatched. It’s a possibility that a dead wasp is found in your male fig because female figs digest the wasp corpse.