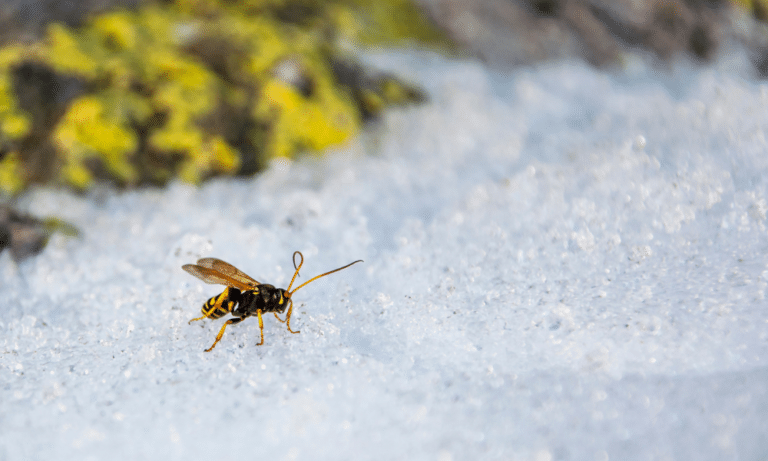 Wasps are quite active during the warm season the moment spring arrives through to late summer. However, you do not see many wasps out in gardens when winter rolls around. What can be the reason? Do wasps die in winter or do they hibernate?

Yes, some wasps die in winter. The worker wasps tend to die in the winter, with the exception of queen wasps.

As the temperature begins to drop, the worker wasps will die off. You will eventually see the colony disappearing. However, not all wasps will die. The queen wasps live during the winter as they attempt to hibernate.

Queen wasps will find wall cracks or sheltered places to hibernate. When winter ends, these queens will begin building the nest and lay eggs to begin the colony.

What Temperature Do Wasps Die Off?

If you are familiar with wasps, you may have noticed that they disappear around the time winter arrives. When the cold weather arrives, wasps will begin to die around 15C/60F.

It is important to remember that the worker wasps will die, with the exception of the queen wasp and some larger worker wasps.

The queen wasps left behind are inseminated and will be looking for a place to hibernate until the cold weather passes and spring arrives. However, during hibernation, wasps will not be safe.

Predators tend to find their way to wasps, including spiders and other large insects. Some queens will therefore be killed off and consumed while hibernating.

There are adult wasps that can survive during the winter months. These wasps look for crevasses in trees or cracks in walls. The wasps which hibernate tend to be queens who are inseminated already.

These females spend the entire winter hibernating, waiting for it to get warm. The queen wasp is one that is responsible for starting and building the nest.

However, it can be difficult for wasps to survive even during hibernation. Most of the female wasps which hibernate will not live long because they do not have food supplies stored up. Therefore, one or two queen wasps will live while the rest of them will die.

Can You Still Find Wasps in The Winter?

Despite most wasps hibernating during the winter, you will still see some outside. However, as you spot wasps outside, you will find that they are slower compared to when flying around during the summer months.

Wasps during the wintertime do not have enough energy and are less likely to survive unless they return to their nest to hibernate. While most of the wasps do not survive the winter, you can still find one or two.

How Does Cold Weather Affect Wasps?

While we know that wasps die during the winter, it is lesser-known why? How would the cold weather affect wasps, and why can’t they cope with it?

Wasps know when summer is about to end, and they prepare for the cold. You will find that wasps are more aggravated than usual because there is not much food available and they fly around in a panic.

The worker wasps are in search of food to ensure that the queen wasps are well-fed, so the queen survives during the winter. During this time, worker wasps become protective of the nest and the queen.

These wasps will consider you as a threat and will be ready to attack if you mess with the nest.

When winter approaches and temperatures begin to fall, the wasps will continue to shut down. Usually, wasps are flying, scavenging in search of food during the warm summer months. But when it begins to get cold, wasps will slow down and limit their activities to save some energy.

The cold weather heavily affects how wasps function every day. The metabolism drops, and once the temperature falls below 10C/50F, wasps stop flying completely.

Dead at Freezing
If the temperature reaches freezing then wasps will die. This is why they’ll try to hibernate in homes, in walls and inside trees where more warmth is retained.

You will usually spot wasps during the spring and summertime. However, when winter approaches, wasps will begin to disappear.