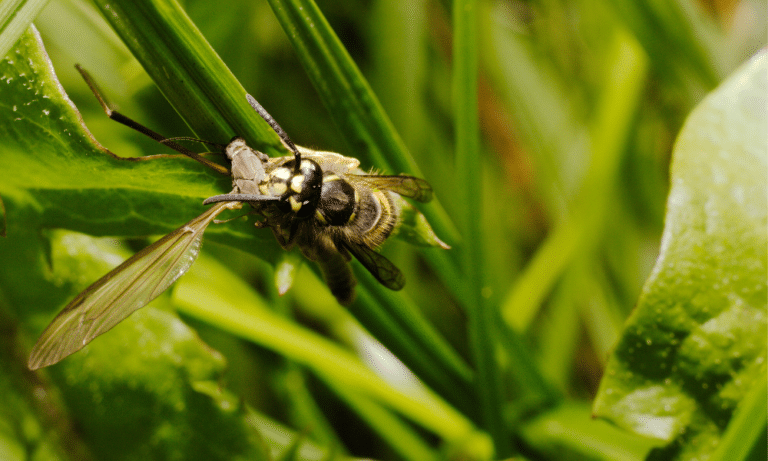 Daddy long legs are part of a species known as Opiliones and are not spiders. The name these insects have is derived from their long legs compared to their small bodies which are what makes them easy prey. So, do wasps eat daddy long legs or will they leave them alone?

Yes, wasps do eat daddy long legs occasionally. They will even kill (and not eat) them if they’re fighting over the same food source.

It may come as a surprise, but there are instances where wasps have eaten daddy long legs.

One of the reasons can be simply because of food or competition. Daddy long legs are not the only insects searching for food who face competition for that food. One of its competitors is wasps which have been known to kill daddy long legs.

Wasps will rarely eat daddy long legs, even if they do so on some occasions. But there is simply no reason for a wasp to eat a daddy long legs because they provide little-to-no nutritional value to a wasp.

If a wasp does decide to eat a daddy long legs, it’s more likely out of revenge.

Instead, you’re more likely to see a wasp fighting with a daddy long legs. Wasps can be incredibly brutish in the natural world and will fight with other insects over habitat and food.

Wasps will use whatever they can to attack and kill a daddy long legs when they end up in a fight. If this means that the wasp has to string the daddy long legs then so be it.

Remember, unlike bees, a wasp can sting away without risking their own life.

So, in some rare instances, wasps will eat crane flies. But this is not something you’ll commonly see. There is more of a chance that a wasp will simply kill a crane fly.

What Do Wasps Prefer to Eat?

Wasps are not picky with their food and have quite a varied diet. However, there are some favourite items that wasps like to consume:

Wasps love to eat all sorts of different bugs. Usually, wasps are carnivores and will eat other insects. They can be found to eat ants, bees, flies, spiders, aphids, crickets and more.

Although many gardeners assume that they are pests, wasps can actually be beneficial, and it is a practice in many places to release them in crops to tackle the pests.

Other than bugs, wasps also like to consume honeydew. This is when aphids suck on plants and produce a sweet sap called honeydew. Wasps will also consume honeydew from aphids and other bugs which is you’ll often see ants and wasps fighting and competing over aphids.

It can be surprising to know, but wasps also like to eat the food that we eat. Usually, you will spot wasps around picnic baskets filled with food or compost piles. One of the ways you can attract wasps to your garden is to have a compost pile or a simple pile of food scraps.

Like many insects, wasps are attracted to sweetness. Therefore, wasps are big fans of nectar and fruit. Usually, orchards or fruit trees will attract wasps. This can be a major inconvenience if you’re trying to grow your own fruit.

The bad news continues because wasps will also be attracted to any rotten fruit which has been left on the ground. If you don’t want wasps in your garden then ensure you quickly and regularly clear the ground of any fallen fruit if you have your own fruit trees.

As we’ve mentioned already, wasps are brutes. They like to eat honey and will attack weak hives to steal it. If a wasp wants something then they’ll assume they can fly right in and take it without a fight.

Wasps are one of the common pests you will find in your garden. One of the preys of wasps can be daddy long legs. This is not a spider, but wasps occasionally eat them, especially when they compete for food.

Other than daddy long legs, there are many other insects that wasps eat. Wasps eat caterpillars and aphids. Other than this, wasps also feed on honeydew, honey and human foods.

As you’ve probably discovered, wasps are far from fussy insects.