Wasps are one of the common insects found in gardens. Wasps have incredibly varied eating habits. In fact, they will eat a whole array of different things. But what about other insects? Do wasps eat flies for example?

Other than plants and flowers, wasps will also consume insects. There are meat-eating wasps that consume insects with flies being a part of their diet.

Wasps will actually consume flies to feed their young. The larvae need nourishment in the form of protein, so wasps consume insects like flies and feed them to their young.

What Insects Do Wasps Eat?

Wasps follow a versatile diet and consume all sorts of insects. Some of the insects which wasps consume are caterpillars, spiders, crickets, aphids and beetles.

Adult wasps will not eat the insects but will kill them. Wasps attack the insects and paralyze them to then feed their young. In some cases, wasps will lay their eggs inside the pray.

As a result, the prey becomes the host for the eggs. When the eggs hatch, the larvae feed on the adult wasps from the inside. The host lives and provides a place for wasps until they mature and emerge from the insects.

How Often Do Wasps Eat Insects?

As seasons change, so do the wasps. You will see wasps being active when the temperature is warm. This is the case with most bugs. Obviously, when wasps are more active, they will eat the most insects.

You will spot wasps from the beginning of spring until the end of summer. When the winter months arrive, and the temperature begins to drop, wasps slow down. The cold winter proves harsh for worker wasps, and they die.

Except for the queen, which lives long enough to hibernate the winter months, all the wasps will die. Hence, you will not see many insects in the cold winter months.

When it comes to the consumption of insects, wasp larvae eat more than adult wasps as they are growing and require more protein and energy to survive.

A wasp’s diet is not limited to insects. There are other things that wasps like to consume, and they are not picky with what they eat.

Wasps are not limited to gardens plants and insects, but will also eat human foods. For instance, you will notice wasps around food like picnic baskets and compost piles.

Wasps are also attracted to meat. These insects will consume meat. Wasps like to consume raw meat as well as cooked produce.

Most insects, including wasps, are attracted to sweetness. Wasps like to suck on nectar as well as a different fruit. Mostly, orchards and fruit trees attract wasps. Moreover, most of the time, wasps will be attracted to rotten fruit fallen fruit.

Wasps will also attack beehives if they get a chance. These insects are attracted to honey and will raid entire beehives to steal it. If the beehive is weak, it will not be able to defend itself, and wasps will destroy it. However, a strong beehive can protect itself against wasps.

Do All Wasps Eat Insects?

There are different species of wasps on the planet. All the species differ from each other in one way or the other. All these different wasps will eat different foods.

Wasps are known to consume insects and other garden pests. Adult wasps, however, belonging to certain species will consume flowers and nectar. However, the larvae of these wasps will feed on the protein they get from insects like spiders, flies, aphids, and caterpillars.

There are some species of wasps that are predatory. The majority of these wasps are carnivorous and consume insects like bees, praying mantis, and other even wasps.

Other than this, wasps will also chew on materials, although they do not consume them. For instance, the famous paper wasps are known to chew wood to make their nest. These wasps are also omnivorous and enjoy plants as well as other insects.

While wasps will consume insects, the frequency depends on their species. Not all wasps will eat insects. The bald-faced hornets tend to feed on nectar and fruit juice. With so many unique species of wasps, you can expect different diets from each of them.

Among many insects that wasps like to consume, flies are one. You will spot wasps being active during the summer when it is warm out. Hence, this is when they consume the most insects. 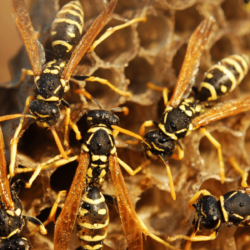 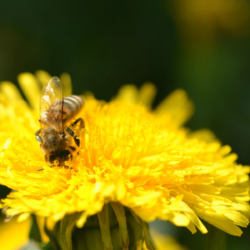