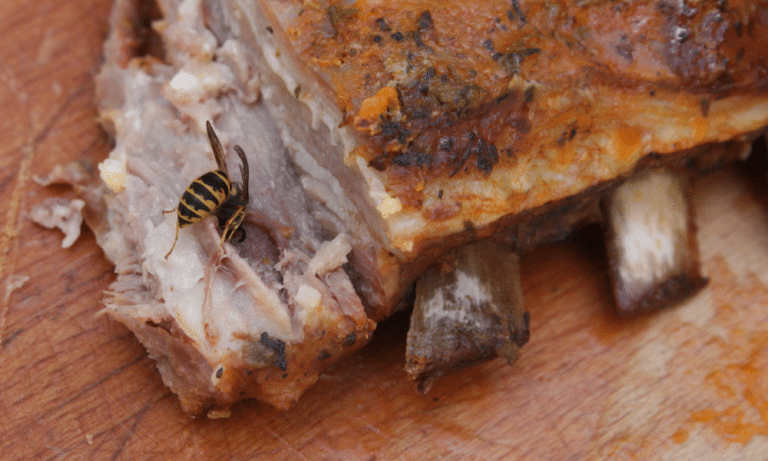 Wasps are attracted towards a range of food which they then eat. The kind of diet a wasp follows will vary according to its species, of course, but do wasps eat meat in general or will wasps avoid eating it?

Yes, wasps do eat meat. Although not all wasps will, the most common species of wasp you often find in the garden do consume meat.

The yellow jacket wasp is one of the most common meat consumers. These wasps can eat and digest meat. This is why they also eat other insects. If you leave out meat in some form, it is likely to attract wasps as they seek ways to consume protein.

Are Wasps Attracted to Meat?

Many people only consider wasps to feed on plants. But, these insects eat other pests, fruits and even meat. Wasps are attracted to meat as it is a great way for them to receive their protein needs. It’s also a great source of food for their larvae.

Wasps larvae need protein which they receive from worker wasps. However, larvae do not have the mouthpieces required to break the meat down themselves.

The worker wasps, therefore, work by killing insects like flies, bees and caterpillars. Wasps will kill the prey by using their sting, cutting them up and taking them back to their nest.

But, wasps also consume meat that humans would normally eat including chicken and beef. Wasps will use their mandibles and cut pieces from the meat if they get an opportunity (and aren’t shooed away by a human).

Are Wasps Attracted to Raw Meat?

Meat does not need to be cooked to attract wasps. These insects will get attracted to raw meat, which you leave out. Wasps do not have a preference for the cut of meat.

If you leave food out, for instance, pieces of chicken or beef while preparing a BBQ, it is likely to be eaten by wasps. In addition, wasps will consume the meat left in trash cans or compost piles.

This is why BBQs and picnics become a big attractant for wasps. If you want to avoid this situation, ensure you clean out your BBQ grill regularly and only bring the meat out when you’re ready to cook it.

Similarly, after a picnic, be sure not to leave any edibles out in the open, or it will attract wasps.

Most of the wasps you will find are carnivores and love to feed on meat. This is why you will also find wasps eating dead animals.

However, whether a wasp eats a dead animal or not is dependent on how long it has been since the animal died. Wasps will usually swarm towards a dead animal that has recently died.

Wasps will consume dead animals like birds or rats if they have died recently. As aforementioned, wasps rely on protein, and these dead animals are an easy way to get it.

How Do Wasps Eat Meat?

You do not see a mouth on a wasp like you would with other animals and insects. However, wasps can eat meat as they can cut it into pieces.

Wasps have mandibles which they use to cut meat. The mandibles are like pinchers that open and close like scissors. These tools have sharp edges which exert a cutting force.

You may think that wasps have teeth that enable them to consume meat. However, the mandibles are used to move the meat in the mouth, breaking it down in the process. In the end, wasps will end the process by consuming the food by chewing or licking it.

Do All Wasps Eat Meat?

The kind of meat a wasp wishes to eat depends on the type of wasp it is. For instance, social wasps live with a colony and work together with other wasps. They will cut large pieces of meat to take back to the colony.

On the other hand, solitary wasps live alone so will cut and consume meat they find in one sitting.

Some of the wasps which consume meat include black wasps, yellow jackets, paper wasps and more. Along with meat as their main protein intake, these wasps will prey on insects.

As you well know, wasps consume human foods, and this includes meat, both cooked and raw. There is no one cut of meat that wasps prefer. They will eat any scrap of meat that is left behind.

Wasps eat meat for protein which they take back to their nest to feed the young. These insects do not have a mouth to chew but have mandibles that help them eat meat. Wasps will also eat dead animals as it is the easiest way to obtain protein.