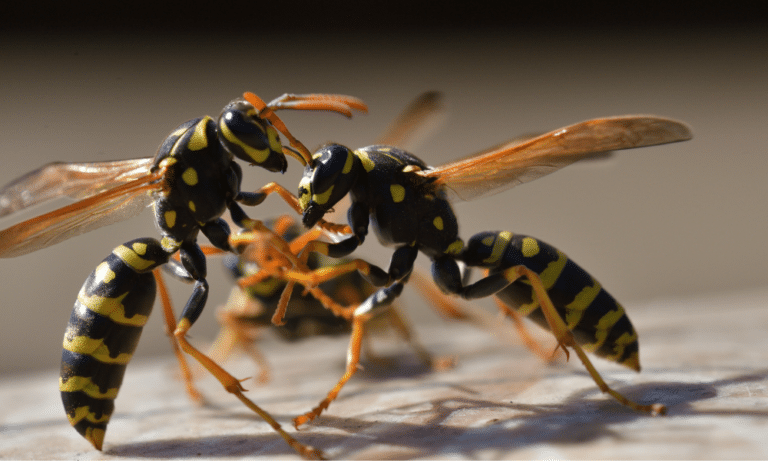 Many of us will cause harm to insects, especially ones like wasps, without even thinking about the consequences. But, do wasps feel pain? And is causing them harm or injury a moral thing to do?

No, wasps do not feel pain in the same way humans or other animals do.

Wasps, unlike humans, do not feel pain, but they can respond to threats or dangers that could cause them harm. Wasps have neurons that provide information about their situation, so these insects know how to protect themselves from any danger.

However, these messages are informational and do not have an emotional aspect related to them.

Do Wasps Have Emotions?

Whether insects like wasps have emotions has been an ongoing debate for a long time. We understand emotions through humans experiences, and hence, it can be a little tricky to detect them in non-human forms, like insects.

There are a lot of factors that go into assessing emotions in animals or insects. This relates to physical and behavioural aspects, response time, expressiveness, and memory.

When it comes to wasps and insects, they do not have emotions. Feelings and emotions are quite different in these insects than in humans.

All the functions which wasps conduct are directed toward preserving their species. Wasps have a short life and will only perform actions that ensure that their species do not go extinct.

For instance, male wasps only live for a few weeks once mated. The worker wasps will die after the mating season rather than survive the cold winter. Wasps may have pain reflexes during difficult times, but they do not have an emotional response to the pain.

Emotions like pain relate to changing behaviours. Studies have shown that insects tend to alter their behaviour if they have suffered from an injury. For instance, being careful, even after the injury has healed, so they do not get hurt again.

However still, the adaptation of behaviour is more of a psychological response than an emotional response. Wasps do not feel pain like humans, and how they perceive it is also different.

Do Wasps Have a Conscious?

When we talk about pain and other emotions, they largely relate to being conscious. This can be characterized by having self-awareness.

Wasps have a centralized nervous system, which means the brain is developed. However, many animals do not have developed brains, which can lead to questions regarding their consciousness. But, since insects like wasps have a brain, we can say that they are conscious.

If you have ever had to experience wasps in your area, you may have noticed the buzzing sound which comes along with them. Wasps tend to make a lot of noise, and if you hear some buzzing, this is an indicator that there is a wasp nest near you.

However, wasps do not scream as you would spray them or squat them to death. Insects are not known to have an emotional response. On the contrary, wasps may attack you as a response.

While insects may not respond by screaming or wailing in pain, they will still respond in the form of an attack. Wasps may chase you down and sting you. However, this is more of an informational response than an emotional one. This is how wasps have managed to survive after all this time.

How to Humanely Kill Wasps

Wasps may not experience pain in the same manner as humans, but that does not mean they should not be respected as living beings. We understand that wasps flying around can be a dangerous sight, but there are a few humane ways you can adopt to kill these insects.

Here are some of them:

Wasps, like most insects, are attracted to sweet, sugary drinks. One of the ways you can keep wasps away from yourself is to put out sugary drinks.

You will only require a cup or two to achieve this. The wasps will be drawn towards the drink to consume it, and you will be safe from getting stung.

One of the ways you can keep wasps away is by tricking them. Wasps are territorial, and they will not enter your area if they know other wasps are there.

You can hang a fake wasps nest, more than one if you would like, in your garden. Preferably, it would help if you hung these wasp nests in different garden areas where you may spot the most wasps.

Get Rid of the Nest in Winter

If you want to get rid of the wasps, it will help if you wait until winter. The worker wasps tend to die when the cold weather approaches, leaving the queen wasp behind. You will be left with little wasps, and it will be easy for you to handle an entire wasp nest.

It can be interesting to know more about the animals that reside in our garden, how they function, and their behaviour. Many people wonder if wasps can feel pain, for instance. However, the definition of pain when it comes to wasps can be different from humans. Wasps do not have any emotional response towards situations, and it is only informational.

Moreover, when you proceed to kill wasps, they will not scream in response. Wasps are only known to make buzzing sounds, and they do not make any other noise. However, you should still treat wasps humanely and get rid of them without causing too much harm.

You can use sweet drinks and a fake nest to divert them or eliminate the nest in winter when most of them have died already.