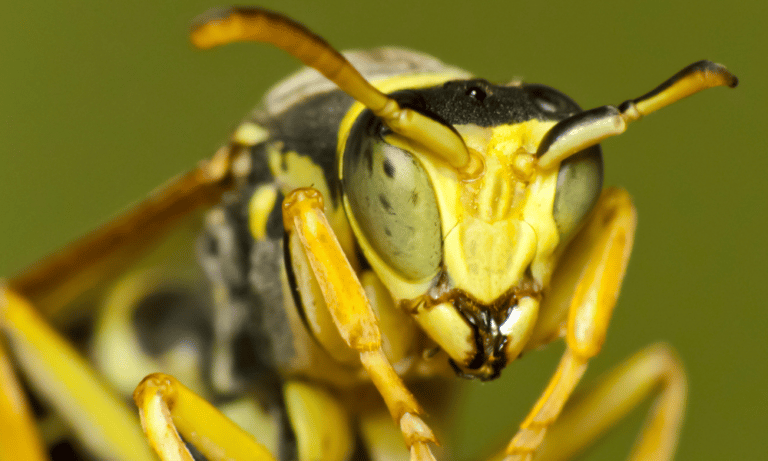 You know that wasps have yellow and black bodies, antennae and a stinger but how do they hear? Do wasps have ears or not?

No, wasps don’t have ears like us, but they can hear differently. A wasp has several hairs on the second antennae element that detect differences in the pressure of air and sound.

Wasps don’t have ears like us, but they do, in fact, hear. They hear not from an external organ but with the help of several hairs on their second antennae element; through it, they detect pressure differences in the air and sound.

These sensory organs, which allows wasps to hear the sounds from their surroundings, is called Johnston’s organ.

Most other insects hear through an organ called a tympanic organ. A tympanic organ is a small membrane that sits on various parts of an insect’s body. But this is not the case for wasps.

Wasps don’t have ears and eardrums like us, but that doesn’t mean they can’t hear or are deaf. They may not have physical ears on the sides of their heads, but they have something different.

Their ears are replaced by several hairs on their antennae which allows them to hear the difference in pressure of sound and air.

How Do Wasps Hear?

Wasps can hear sounds from their surroundings through their antennae. Their antennae work similarly to our ears. Generally, insects depend on their antennae for their sense of smell, hearing, and feeling.

Wasps are the same, but their antennae aren’t precisely what allows them to hear their environment. It’s the several hairs that are present on their antennae that help the wasps hear.

These hairs are called Johnston’s organ, as previously mentioned, and with it, a wasp can hear differences in air and sound pressure.

What Can Wasps Hear?

Wasps can hear by perceiving sound waves. The differences in air pressure are taken note of by Johnston’s organ and are interpreted. As wasps don’t exactly have an eardrum like most animals, auditory perception is significantly reduced for wasps.

Because of the hairs, the sensory vibrations are only recorded to a limited extent compared to a membrane that can record much more elaborately.

Due to the deflection of the antennae flagella, the hairs are also deflected. The Johnston organ has a structure that can limit the frequency range, which allows the wasps to hear only 500 Hz.

This is the limit, and they can’t hear anything that exceeds that.

These hairs on a wasp’s antennae aren’t just limited to sound; they can hear all forms of pressure differences in the air. Vibrations in the wasp’s environment are very helpful and notify the wasp whether suitable prey or an intruder has entered their territorial area.

How Do Wasps Communicate?

Just like how a wasp’s hearing is different from ours and most animal’s hearing, the way they communicate is unique too. Wasps usually communicate through tactile communication and pheromones.

Their methods of communication are complex, and the detail is still yet to be discovered. Social wasps are known to have varying strategies for communication.

Wasps do not communicate by producing sounds, like most animals and some insects. Other insects that have better hearing capabilities use sound to communicate.

Wasps often use pheromones to call other wasps from their colony when they come across suitable prey or if they find any predators or something that has provoked them.

If you go near a wasp’s nest or startle a wasp, it’ll release pheromones that’ll call other wasp troops from their nest, and in a couple of seconds, a whole swarm of wasps will be after you.

Besides pheromones, according to research, wasps are seen to communicate through rhythmic sounds. This is mainly done when one wasp finds something edible in their area.

They will produce a drumming sound by using certain parts of their nest with the help of their abdomen. This will inform other worker wasps. They will use sound to communicate, but it will be done in a restricted and limited area, so the sound is within range of their hearing organ.

Can Wasps Hear Us?

When you accidentally enter a wasp’s area or provoke it, the wasp most likely will charge at you with its stinger towards you.

This may look like as if the wasp heard you, but this isn’t the case.

Wasps don’t have a good hearing range. They don’t react to the sounds or noises we make. If you screamed because of a wasp, it wouldn’t hear you. If you yelled at a wasp trying to shoo it away, it wouldn’t hear that either.

However, the thing that triggers their hostility towards you is the way you move and flail your arms when you get startled by a wasp. Your intense arm movements threaten wasps because they think you’re attacking them, so they resort to stinging you.

Got more questions about wasps and their ability to hear? Then check these out:

Are Wasps Affected By Sound?

No, wasps are unlikely to be affected by sounds. When you scream and panic, they cannot actually hear the precise noises you make.

Do Wasps Get Angry at Loud Noises?

No, a loud bang is unlikely to antagonise a wasp. They are not going to be able to tell what the noise is.

Wasps do not have ears. This doesn’t mean that they are deaf, however. They have tiny hairs on their antennae that allow them to hear.