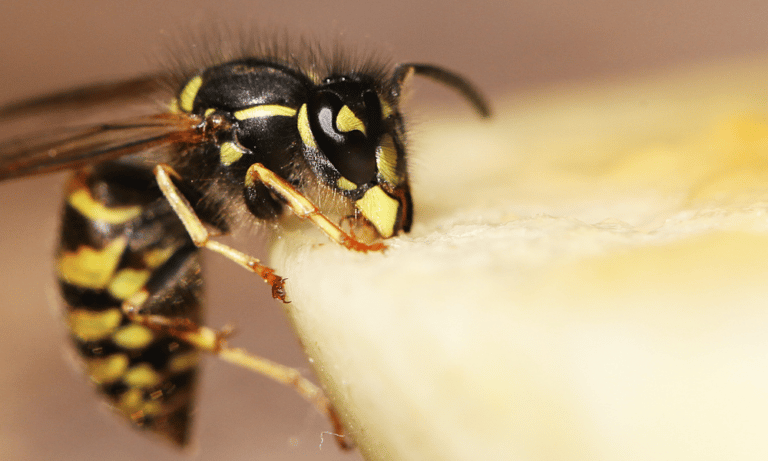 You might think you know everything there is to know about wasps but what about their internal organs? Wasps must be able to breath so does this that wasps have lungs or not? If they don’t, then how do they breath properly?

Like all other insects, wasps do not possess lungs or organs like us. A wasp’s circulatory exchange relies on a simple gas exchange through several tiny holes in its abdomen called spiracles.

Like all living organisms, insects require oxygen to live and thrive and produce carbon dioxide as a waste product. However, this is as similar as a wasp’s and human’s respiratory systems can go as besides this one key point, everything between a human’s and a wasp’s respiratory system is different.

People and most animals breathe through their lungs.

However, wasps do not possess lungs and any of the other organs humans have. A wasp’s whole anatomy is very different and quite complex. They don’t even have bones!

Wasps neither have lungs nor do they transport oxygen through a circulatory system the same way people do. Like all other insects, a wasp’s respiratory system relies solely on a gas exchange through several tiny holes present on their abdomens called spiracles.

Oxygen goes in through these, and carbon dioxide is expelled as waste.

How Do Wasps Breathe?

Insects, including wasps, don’t breathe through an organ but through holes. This may sound odd, but everything in an insect is different.

Their organs, skeleton and senses differ from us and other living organisms. Instead of a pair of lungs, their breathing is done through several tiny holes in their abdomen.

These holes are called spiracles.

It’s basically like a sponge, just like a sponge has several tiny holes so water can enter it to moisten it. Similarly, a wasp’s spiracles work the same way. They allow air to enter the interior tracheal system and the wasp’s tissues to be filled with oxygen.

Metabolic waste, which is carbon dioxide exists out of the body of the wasp through its spiracles.

Can a Wasp Control its Respiration?

A wasp and any other insect can control their respiration by opening and closing their spiracles.

If a wasp needs to hold its breath, for example, if it falls into a tub or pool of water, it’ll close its spiracles to block the passage of water into its body. This way, the wasp doesn’t drown.

A wasp can use its stored oxygen to survive as long as it can. Wasps will survive up to a couple of days without the need for oxygen.

Besides opening and closing their spiracles, wasps also have a low metabolic rate which helps them hold their breath for a long period of time when such a situation arises.

Do Wasps Have a Heart?

Like us, insects, including wasps, also have hearts, but like every other organ of an insect, it doesn’t look like our heart, but its functionality is a little similar.

Like our hearts pump blood, a wasp’s heart pumps haemolymph and supplies it throughout its body. Instead of blood like us, they have haemolymph, which serves the same purpose as blood.

Haemolymph transports nutrients to every cell in the wasp’s body. The functionality of a wasp’s heart is identical to our hearts, but their circulatory system’s anatomy is very different from most other organisms.

The anatomy of the wasp heart differs significantly from a human’s heart.

At the part of the head of the wasp, there’s a tube called the aorta, which empties the haemolymph from the brain of the wasp. The haemolymph enters the heart at the hind end of the wasp’s body again and cleans the internal organs and heart as it’s circulating through the hemocoel.

Any insect’s heart rate, including a wasp, can vary in species, but often, it’s around the range of 30-200 heartbeats per minute.

Do Wasps Have Blood?

Like we have blood, insects have haemolymph, which is their variation of blood. It has the same functionality as human blood but a different appearance and doesn’t contain red blood cells like our blood.

The reason for haemolymph not having red blood cells is that it doesn’t transport oxygen, which is the blood’s primary function and purpose in vertebrates.

Instead, in wasps, oxygen is taken in through tiny holes called spiracles. The spiracles are present in the wasp’s exoskeleton in its abdomen region.

Haemolymph has a higher amount of plasma compared to human blood. More than half of the total volume of blood is plasma, but this watery substance comprises about 90% of the wasp’s hemolymph.

Due to the absence of red blood cells in it, wasp haemolymph isn’t red like vertebrate blood. Haemolymph is mainly water, so it doesn’t have a color and is transparent like water in appearance.

Do you still have questions about wasps and how it breaths? Then check these FAQs out:

No, wasps cannot breath underwater however they can shut their spiracles and then hold its breath for an extremely lengthy period. They cannot swim either!

Although wasps don’t have lungs, they still breathe and the gas they breathe in is still oxygen.

Wasps have drastically different anatomical features than most other animals and us. They have a skeleton outside their bodies; they have antennae that serve the purpose of noses, fingers, and ears.

Wasps also don’t possess lungs, hearts, or blood. A wasp has haemolymph instead of blood which serves the same purpose as blood which flows throughout the body and supplies nutrients.