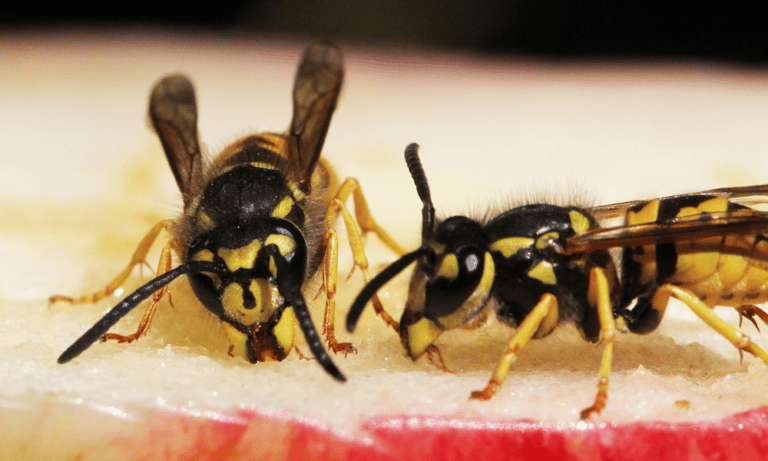 Wasps eat, we all know that. But, how exactly do they eat? Do wasps have teeth and a tongue? Or do they eat in some other peculiar way?

Yes, wasps have teeth, but their teeth aren’t like ours. Their teeth are pointy and sharp with ridges along the edges of their mouths called mandibles.

Wasp mouths are strong, allowing them to chew through tough and hard materials such as animal skin or even wood. Certain species of wasps even use their teeth as a way to inject venom onto their prey before they chew on them or suck them.

Their teeth are used for eating and as a way to defend themselves. Wasps also use their teeth to build their nest by chewing wood pulp or mud and mixing it with saliva.

Do Wasps Have Mouths?

Wasps have mouths and teeth, but neither of these looks anywhere close to the mouth and teeth you’re usually aware of.

A wasp’s teeth are on the edges of their mouth parts which are a pair of jaws called mandibles.

The females have functional teeth, whereas the males don’t. Their mouthparts are very useful. They can be used in nest making, defending themselves, holding onto food, ripping apart insect flesh and fruits, and eating.

When a wasp feels threatened or is provoked. It will use its mandibles as a defensive mechanism and will bite.

Do Wasps Have Tongues?

Wasps have tongues that aren’t flat and thick like ours. Wasp tongues are long and appear as a tube. They use it for drinking and feeding on nectar and eating insects, fruits, dead matter and more!

Wasps specifically use their long tongues to feed on honeydew.

This honeydew isn’t the fruit you’re thinking about. It’s not a melon but rather an end product secreted from aphids. Aphids feed on plant sap, and when they drink too much sap, they release the excess sap from their abdomens in the form of honeydew.

This is why you’ll often see ants and wasps fighting – they both want the honeydew!

How Do Wasps Eat?

Wasps eat food with the help of their mandibles which allow them to crush and chew their food.

A wasp’s mouth has six individual parts. These parts include a pair of maxillae, the labrum, the hypopharynx (which is a lower lip), and two pairs of mandibles.

The labrum has two lobes connected at the centre of the face with a hinge joint. From above, it appears to be in a shape of a V.

The maxillae are situated into grooves on both sides of this part when they are closed over some food.

They are modified to include several small hairs called sensilla. Sensilla are special sensory structures. These sensilla allow the wasp to gather pollen grains or nectar. Nectar and pollen aren’t visible to us, but a wasp can see these easily.

What Do Wasps Eat?

Wasps are mainly opportunistic insectivorous insects. Some species rely on nectar and fruit.

They also eat dead animal matter. A wasp can also eat rotten fruit. As wasps are opportunistic, they will basically eat whatever they find that is edible and won’t miss out on an opportunity for food.

Wasps eat a lot and take some food to feed their queen and the larvae. Certain species of solitary wasps are parasitic and live alone. These colony-less wasps lay eggs in any insect, and their larvae burrow from it by eating through it.

Honey is a favourite for wasps, but as they don’t and can’t make honey for themselves, they go and steal it from the ones that make it, such as bees. A sugar-craving wasp will also end up in the kitchen or picnic if there are any sweet items.

Do you still have questions about wasps and their teeth? Then check these out:

If wasps have teeth then they must be able to bite. Unfortunately, they will usuaully resort to stinging as it is a far more ssuccessfully defensive maneuver.

Although wasps have a tongue, it is not like our tongue and it used for sucking up liquids from foods and plants. They will, therefore, not lick humans.

Wasps are peculiar animals with interesting habits, ways of life, and characteristics. Wasps have teeth, a mouth, and a tongue, but none look similar to our body parts.

A wasp’s teeth are pointy ridges lined up along their mouthparts called mandibles. They chew and crush food with their mandibles, and their long slender tube-like tongue helps them taste and drink nectar.