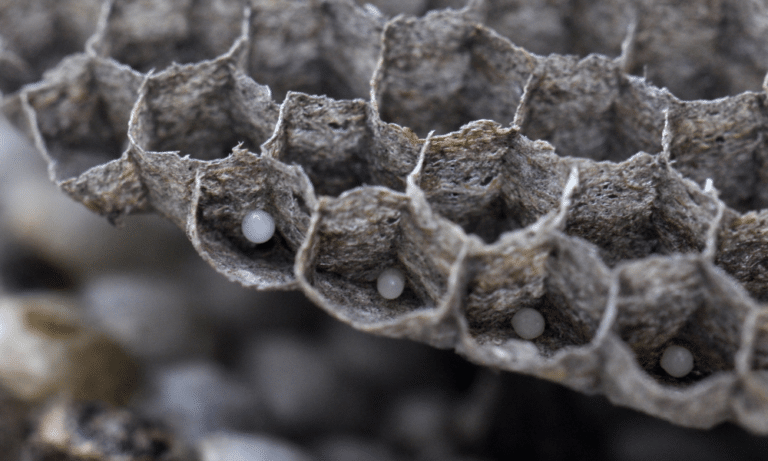 Wasps resemble bees, but their differences in behaviour and appearance are extensive, so they’re easily distinguishable. Do wasps lay eggs like bees and most other insects, or is their way of reproduction different?

Yes, wasps do lay eggs just like bees and other insects. Most wasps mate once a year, and the male dies after mating.

Wasps are divided into two subgroups: Social wasps (common wasps) and solitary wasps. Most species of social wasp (common wasp) mate and lay eggs once a year. When mating is finished, the female wasp will hibernate in the ground or any protected space with enough shelter to pass the winters.

After mating, the males die due to a process called suicidal reproduction. As odd as this process may sound, it occurs in several different animals and their species where the mates die after mating.

When spring comes, fertilized female wasps will start making their colony by laying eggs. Their eggs are laid in pods similar to a cell in appearance. The eggs then hatch, and larvae start coming out from them.

After they’ve exited their respected cells, the mother wasp, also known as the queen, proceeds to feed them.

When summer is about to end, unfertilized eggs start hatching, and male wasps come out. Fertile females start emerging from the healthy, well-fed larvae. The wasps mate and the process starts again.

How Do Solitary Wasps Reproduce?

Solitary wasps reproduce differently from social wasps because all female wasps are fertile among solitary wasps. When a female wasp paralyzes a spider or any other insect with its venom, it lays eggs near it.

This method helps the mother wasp to feed the larvae immediately after they hatch.

This method is also useful as the babies are protected, and the wasp doesn’t need to go far to find food for the baby wasps. However, not all solitary wasps stay with their babies in the nest. Some wasps stay, but few will fly away and abandon them, hoping they grow up into adults themselves.

Solitary male and female wasps mate in spring. Some male species die after mating, while some others survive summers. Solitary wasps live through winters as pupae, which social wasps don’t do.

What Month Do Wasps Lay Eggs?

Wasps are necessary for a healthy environment and are most active in the summer months. Young queen wasps wake up from their winter hibernation in the month of April. After they wake up, they start making nests.

Wasp nests are mainly made from chewed up food fibres and saliva. The queen wasp fills the nest with worker wasps that hatched from the eggs. The queen wasp fertilizes the sperm that was collected previously in autumn.

When May comes, the queen wasp lays eggs in the cells. When the eggs hatch from the individual cells, the larvae are fed by worker wasps. At the start of the month, the second batch of hatched larvae grow and pupate to become adult worker wasps.

This process works in a loop as it keeps on repeating till the rest of summer. At the end of May, the first batch of worker wasps joins with the rest of them to help build the nest and take care of larvae.

The wasp nest is most active in June and July and grows in size. By July, hundreds of wasps have become adult wasps, and hundreds more are resting in their eggs or have already been hatched. These hundreds of adult work wasps go out of the nest to find food.

Wasp activity begins to decrease by the start of the months of August, September and October. Worker wasps start to die off, and the queen wasp slows down in laying eggs during this time.

Where Do Wasps Lay Eggs?

Wasps lay eggs in their nests. Most wasps, mainly social wasps, like to make their nests wherever there’s a void of space or a cavity. Wasp nests can be easily visible on trees, electrical poles, rotting logs, sheds, etc.

Solitary wasps like making their nests and laying eggs near an insect they’ve killed through their venom, so the babies have something to eat when they hatch out of their eggs.

When Do Wasp Eggs Hatch?

When a queen wasp fills the cells with eggs, they hatch after two or three days. After hatching, the larvae feed on insects and mature in the cells.

If you see a wasp nest in a tree in your yard, avoid harming it or else a whole colony of wasps will be after you. Wasps are fascinating insects with a very organized way of reproduction.

They make nests in the summer months on an area with a cavity or near their dead prey. Their eggs hatch after 2-3 days, hundreds of tiny wasps and all of them feed to grow up into adults and get assigned to their tasks and help take care of the nest and larvae.