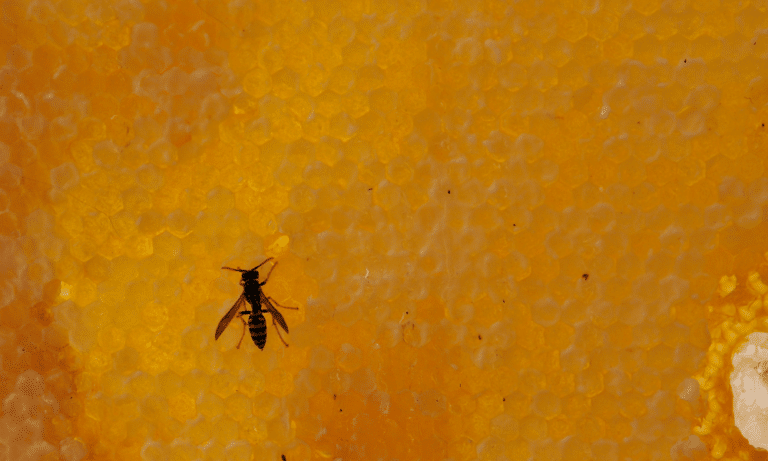 Someone unfamiliar with wasps can easily confuse them with honeybees. If there is one thing these insects have in common it is their sting and, in some cases, their appearance. But, like bees, do wasps make honey or not?

Generally, wasps do not make honey. There is, however, a wasp species that do make honey called the Mexican Honey Wasp.

Honey is associated largely with honeybees. The reason is that it is not common for wasps to produce honey.

However, there is a species of wasps that can make honey. These wasps are called Mexican honey wasps. The honey these wasps produce is edible, and you can use it just like regular honey.

Unlike honeybees, wasps do not make honeycombs. It can seem like wasps produce honeycomb because of the shape of their nests.

Wasps produce paper nests that have the shape of honeycomb but it is not actual honeycomb. The wasps you will spot in your garden do not have wax glands and cannot produce honeycomb.

Wasps do not have honey in their nests, and they do not need it. Wasps build their nests to feed their offspring. They lay their eggs in the nest and bring food to the nest for their young to feed on.

Wasps are carnivores and will consume insects and their larvae. But wasps love to consume honey too. These insects have a sweet tooth and take a liking to honey.

Wasps are flying all the time, which causes them to burn excessive energy. Therefore, wasps rely on sugary foods like honey to provide them with energy.

On certain occasions, wasps will also raid beehives to steal honey. Usually, a bee colony is strong enough to fight off the attack from wasps. However, if the colony is weak, it will not be able to defend itself, and the wasps will take over.

How Do Wasps Make Honey?

Wasps follow a different diet from honeybees, so many people wonder how wasps would make honey? Wasps usually feed on larvae or other insects to gain energy. However, wasps will also consume nectar and some plant materials to produce honey.

But this is also why there are only a few species of wasp that can and will produce honey.

Can You Consume Honey Made by Wasps?

It is important to know where to extract the honey from with wasps. Some wasp nests produce honey which contains a lot of atropine which is poisonous to humans.

Another problem is that wasps do not produce enough honey. Firstly, not all wasps will produce honey and those which do make little of it. You will be unlikely to find wasp honey in packaged containers like honey made from bees.

As aforementioned, wasps can produce honey. This makes many people wonder if they can substitute their regular bee honey for some exotic wasp honey.

Wasp honey is edible, but it does not provide the same benefits as honey made by bees. One of the reasons is the diet of the two insects. In addition, bees produce honey and store it in honeycombs. While the honey rests, a lot of natural compounds get stuck in the honeycomb, which causes it to be beneficial.

Bee honey is loaded with antioxidants and nutrients mainly because of pollen which is in low quantities in wasp honey. Wasp honey has few nutrients if compared to bee honey.

Wasps are known to fly around and sting people. Therefore, it can come as a surprise when people find that wasps can produce honey – but it is rare! There are some species of wasps, like the Mexican honey wasps, which produce honey.

Not all species of wasps will contribute to the production of honey. One of the reasons why wasps cannot produce honey like bees is due to their body structure. Wasps have a body designed for scavenging rather than making honey.

Wasps also do not produce honeycomb. These insects live in paper nests that are intricately designed and can appear to be like honeycombs. Wasp honey is of little nutritional value due to the lack of antioxidants and provides little benefit. In addition, wasp honey is not widely available in the markets.