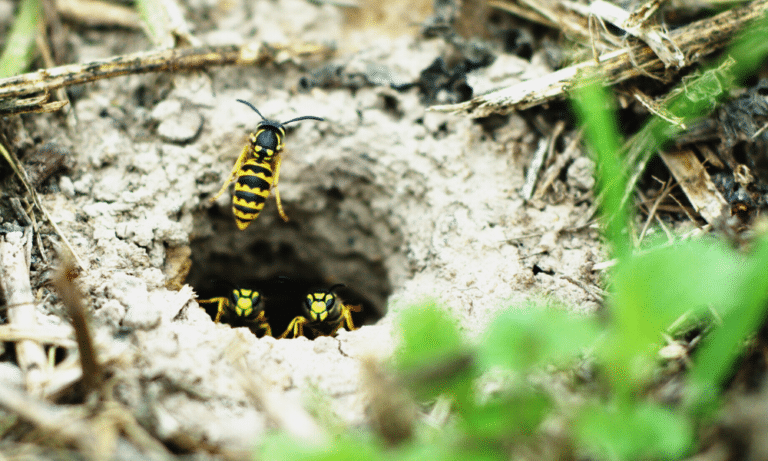 Wasps can be found buzzing around your garden during the spring and summer. But where are they coming from if you cannot see a nest? Do wasps nest in the ground too?

As the picture at the top of this article shows, the hole is large enough for several wasps to fly in and out of simultaneously but it is still very small in comparison to the rest of your garden. Unless you see a wasp actually fly in or out, you’ll probably never find an underground wasp’s nest.

What Kind of Wasps Nest in the Ground?

Although most of these wasps are unlikely to attack unless they feel threatened, not knowing where their ground nest is can be problematic. Sometimes, pets, children or people can get stung by wasps if they get close to the nest.

Obviously, an above-ground nest is easy to avoid. An underground nest is nearly impossible to avoid when it’s so difficult to spot them.

Wasps generally have black and yellow stripes. However, other wasps have different coloured bodies, like the golden digger wasp, which is black and orange. Unfortunately, there are no major colour differences between ground-nesting and other wasps.

Some wasps will fly in groups, and if that is the case, then they may be nesting ground wasps. Ground-nesting wasps, such as yellow jackets, prefer to stay together in case someone disturbs their nest.

However, there can be some species of wasps that prefer to lead solitary lives. For instance, the golden digger wasp does not like being in groups.

Wasps that live above ground will have thick abdomens. However, burrowing wasps that are found in the ground have slim bodies.

How Do You Get Rid of Wasps Nests in the Ground?

One of the most effective methods which work against many insects is a powder called diatomaceous earth. For humans, this powder is soft, but against insects, it feels like glass. This powder is abrasive and will cut any insect it comes into contact with.

Diatomaceous earth is effective against wasps. One by one, it will kill the wasps and eventually the entire nest. You can use diatomaceous earth by dusting it on any hole you find in the ground that you suspect of being the opening to a nest.

Usually, any opening in the ground is an indication that it is a wasp nest. After dusting the while with the powder, ensure to cover the hole with a rock.

You can also get rid of wasps by using aerosol pesticides. If you spot any openings in your garden soil, it is an indication that there is a wasp nest. You can take the aerosol spray and spray the opening thoroughly.

However, it is important to ensure that you let the spray sit for a while and see if there are any active wasps. You can repeat this process until you are sure that the wasps are dead.

While doing so, it is important to wear protective gear because wasps can sting you during the process.

Another effective method against underground wasp nests is soapy water. You need to use this method during the night when the insects are asleep. You can cover the hole with some fabric and then get some soapy water.

It is important to cover the hole carefully and ensure that there are no escape routes; otherwise, the wasps can get out.

You can make a small hole and pour the soapy water through it. The soap will impair the wasp’s ability to fly and will drown the hive. In addition, the fabric covering will ensure that no wasps get out.

Some species of wasp can nest in the ground. It becomes difficult to get rid of such wasps as spotting the nest becomes tricky. You can tell that there are wasp nests inside the ground if there is an opening.

The most obvious sign, of course, is if you see wasps flying in and out of small openings in the soil.