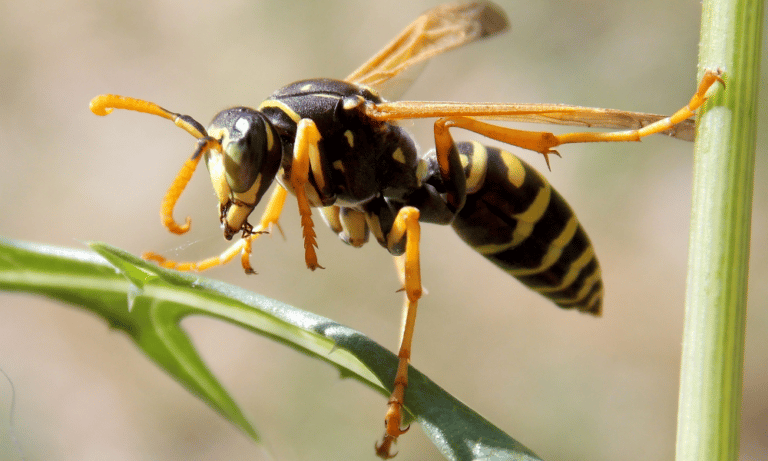 You know one obvious thing about wasps and that’s their ability to sting. But, do wasps poop too? And do they pee and fart and burp? Let’s start with pooping…

Yes, like most insects, wasps poop, and while pooping, they pee simultaneously. The excrements that wasps leave behind are plant byproducts and pollen.

As odd as it may sound, peeing and pooping simultaneously, for most insects, is relatively common. The outcome is a yellow substance that releases beneath the abdomen.

Wasps usually leave behind pollen and plant byproducts in their poop. Their digestive tract is also healthy.

Like all living things, wasps have to excrete, or buildup in their bodies would result in health-related issues as it would for you. Every living creature that eats needs to also get it out of its system, but people and most animals poop or pee separately.

However, this isn’t the same with insects as most insects, including wasps, as they poop and pee simultaneously. The result is a yellow substance that’s a combo of pee and poop.

The more sugary goods a wasp eats, the more it will poop.

Wasps, like most creatures, need food to use for energy and growth. A wasp’s digestive tract will absorb sugar and convert it into energy. The waste product of poop is the result of food matter that hasn’t been digested.

Wasp poop is not dangerous, and neither is it toxic because the main component in it is urea.

The uric acid in wasp poop is partially liquid as wasps poop and pee simultaneously. It’s only wholly liquid in animals with separate organs for pooping and peeing.

As they pee and poop simultaneously, they don’t need much water for excretion.

Where Do Wasps Poop?

Wasps like to be clean, are neat insects, and want to avoid all sorts of dangers regarding their nest. They protect their nests, especially from pests, bacteria, and fungi.

Therefore, to keep their nests clean, they excrete outdoors and not in the nest. They can excrete during flying and after they land. Excretion during flight is very common among wasps as they stay cleaner and avoid contact with their poop.

Wasps inside move to the entrance of the nest and poop out. The queen can only excrete inside the nest and is cleaned by the worker wasps.

How Big is a Wasp’s Poop?

The bigger the wasp and its abdomen, the bigger the poop will be. The length of wasp poop is, on average, around 0.0025 inches. You can easily spot it in an area with plenty of wasps.

The largest poop is of the queen wasp, the biggest wasp in each wasp colony for every type of wasp species. The average size of a queen wasp’s poop is 0.0050 inches.

What is Wasp Poop Composed Of?

Wasp poop is a combination of poop and pee, as wasps pee and poo simultaneously.

Urea is the main component that is present in a wasp’s waste. It’s not toxic and is partially liquid. Urea is even used in the production of cosmetics.

Wasp excretion does not contain any questionable components that may be dangerous or toxic, so if a wasp has pooped on any of your belongings, you can simply clean it off, and the stains can be wiped.

Unlike other living creatures that pee separately, wasps pee simultaneously when pooping. Wasps release the material that can’t be digested from their abdomens.

The result is a yellow combination of pee and poop. Wasp pupae and larvae don’t release excrement; only the adults pee and poop.

The appearance of the excrement that wasps produce depends on what the wasp last ate. The size of the wasp also depends on its excrement. Wasp excrement is yellow, but sometimes it can vary as it can also be brown or white.

The poop is thick, and its colour and thickness vary by the food a wasp eats. The thicker the excrement is, the more yellow it will look.

Got more questions about wasps and their toilet habits? Then you might find these interesting:

Yes, insects fart, in insects, it’s called the gut, and it basically works the same as intestines in people. When we talk about farts, we mean flatus which is the gas that is produced in the intestines. Insects have guts through which they do the same thing; hence they fart.

No, wasps do not burp. However, they fart, pee, and poop, and their poo is excreted simultaneously with their pee.

Wasps, do they poop? The answer to this question is simple; they poop, and when they poop, they pee simultaneously.

Wasp poop is yellow with a partially watery appearance. They also fart, but they do not burp. Wasps poop outside their nests during flight or anywhere they land; their poop is not toxic and is made of urea. Their excretory behaviours are like all other insects.