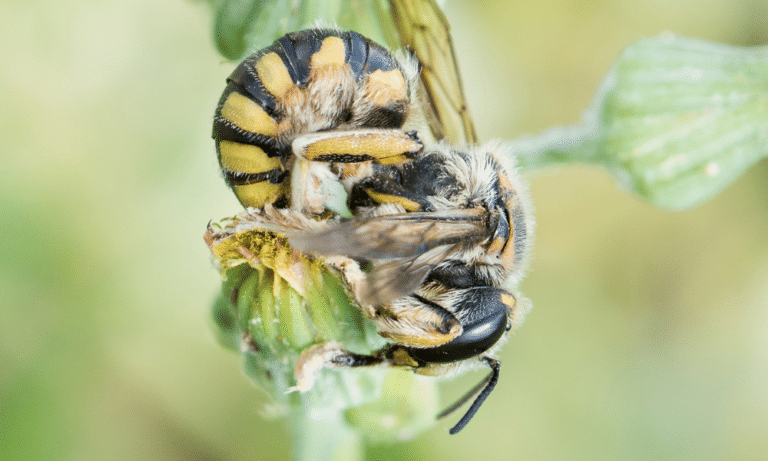 While wasps are inactive during the night, they do not exactly sleep.

You may think about wasps going back to their nests and catching up on sleep. However, wasps do not function in the same manner as humans. It may appear that wasps are sleeping, but they are only dormant during the night.

The wasps are inactive, and their bodies have slowed down. It is only during the winter that female wasps hibernate to survive.

Will Wasps Attack at Night?

Since wasps are less active at night, they are unlikely to attack you. During the day, wasps will be busy looking after the larvae and their nest. However, wasps are inactive during the night, but they do not sleep.

Due to less sunlight and cooler temperatures at night, wasps will spend their time tending to their nest. If you encounter a wasp nest during the night, you will hear the buzzing that wasps are making as they work.

Wasps need to ensure that the larvae are well-fed so they can grow to be healthy and do their part in the colony. Hence, during the night, the wasps also look after the young, which is why you do not see them as you would during the day.

When Do Wasps Sleep?

Looking at wasps as a whole, they do not sleep.

Many people make the mistake of thinking wasps sleep during the nighttime. However, these insects are dormant in the absence of sunlight and due to cool temperatures.

When the winter approaches, female wasps will sleep. These wasps are queen wasps and go into hibernation.

The worker wasps die when the temperatures drop; however, the queen wasps and some bigger ones will look for cracks in walls or crevices to hibernate. Only until the spring will the wasps emerge and build their nest to start the colony.

Are Wasps Active at Night?

You may not see any wasps around at nighttime as they are not active. Wasps go back to their nest during the night. If you have a wasp nest near you, you can notice wasps returning to their nest as night falls.

However, wasps do not sleep and are still at work even inside the night.

Wasps are quite different from mammals, and hence, it can be hard to tell if they are sleeping or not. Wasps have different postures when they are dormant and resting. In addition, the body temperature falls while wasps are ‘sleeping’ during the night.

Wasps get activated by light, and they will become active when the sun comes out. When morning comes, wasps will leave their nest and get to work. For instance, during the day, wasps will look for nest materials. In addition, wasps will search for food to feed the larvae.

Can You Remove Wasp Nests at Night?

The best time to tackle a wasp nest is during the night as wasps are inactive. Most of the wasps will be slow. In addition, the cold temperature and lack of sunlight will make wasps slow.

As soon as there is light, wasps become active. Hence, if you are using your flashlight during the night, it could blow your cover.

It is easy to remove the wasp nest during the night as they are less active. However, you cannot use any source of light as it can cause wasps to attack you.

Despite wasps being inactive, removing an entire nest by yourself is still dangerous. Therefore, it is important to get the help of a professional if you do not have the experience.

Wasps are most active during the daytime as you would see them buzzing around. When nighttime arrives, wasps return to their nests. However, unlike other mammals, wasps will not sleep during the night. Instead, wasps become dormant. Moreover, wasps focus on taking care of the young and working on the nest.

Usually, wasps will not attack you during the night because they are quite slow. Hence, many people prefer removing wasp nests during the night. If you do not have any experience, you should get a professional. You can either use a pesticide spray, or you can opt for natural ways to kill wasps.