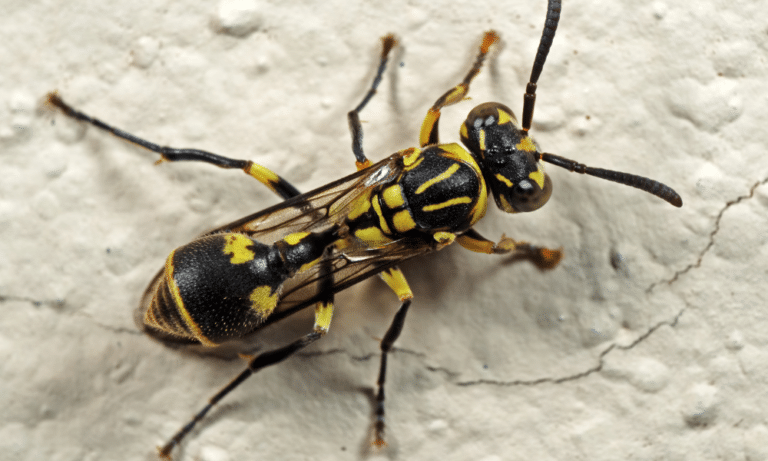 Sometimes, to protect your garden better, it is important to understand how a particular pest develops from birth to adulthood. The more you get to know the insects, the better you will be able to handle them. Wasps are a fairly common pest to deal with. But, what do baby wasps look like?

One of the ways you can distinguish and tell baby wasps apart from adults is by their colour and size. The baby wasps usually have paler yellow and black colours on their bodies. In addition, the size of the wasp is small, up to 1.7 inches long, not beyond that.

Any small wasps you see around do not mean that they are babies. It is likely that there are adult wasps out there that are the size of baby wasps. If you spot any small wasps, they may be adults.

It would help to look at other aspects in order to know whether you are dealing with a baby wasp or an adult one. For instance, a baby wasp will not be as actively buzzing around as an adult wasp and will spend more time close to the nest.

Adult wasps have responsibilities to fulfil, such as protecting their nest and looking out for the larvae. Therefore, these wasps are more active and work to look out for their species during the day.

One clear distinction between an adult and a baby wasp is that the latter do not sting. There are three stages of baby wasps that exist, including the larvae, pupae and young wasps. The baby wasps will not have developed sting tissues that allow them to sting.

During the larvae stage, the baby wasp spends time in the cells of the wasp nest, where they do not really move. The pupae are dormant, while the young wasps experience limited movement and are learning to move as they emerge from the pupa stage.

Can You Kill Baby Wasps?

The best way to get rid of wasps in your garden is by eliminating baby wasps. Ultimately, cutting off the supply of adult wasps of the future.

You can get rid of the baby wasps by destroying the nest. You only need a long stick or a rod to push the wasp nest. Once the nest falls, you can further destroy the nest using a hammer or a mallet.

However, this method requires care because if you kill an adult wasp, it will release a chemical that will attract other wasps to the scene.

Another way to get rid of the baby wasp nest is by covering it using an airtight cover. You can use a plastic bag or container and cover the wasp nest, leaving no room for air. You can leave this cover for two to four days until all the wasps die from suffocation.

What is the Life Cycle of a Wasp?

The lifecycle of a wasp is an interesting thing to know about. Wasp colonies begin to exist during early spring with a new wasp queen and will end in the wintertime as the colony dies. Every wasp colony comprises a caste system with a queen that lays eggs and male and female worker wasps.

Let us look at the lifecycle of the wasp a little more closely:

During the spring, the colony begins. This is when the fertile wasp queens will wake from hibernation and search for a place to build their nest. The eggs laid have to go through the process of metamorphosis, where the larvae become a pupa and then into an adult wasp.

The wasps make their nest from chewed wood mixed with saliva. The queen starts to build a few nest cells to lay the eggs while the rest of the nest is made by the worker wasps.

When summer arrives, the colony expansion is in full swing. The colony begins to grow at a fast rate. The nest also grows to accommodate the wasps, as large as a football. This is also when wasps will be the most active.

By the end of the summer, the colony is at its peak, and the queen has produced eggs, resulting in new queens and fertile male wasps.

When autumn arrives, the weather begins to cool, and the queen wasp dies. This is when the colony will break down as the social structure collapses. During this time, the rest of the wasps will not work towards the nest due to no commitment and are often seen consuming sugary foods or rotting fruit.

The new queen wasps are fertilised by the males and will leave the nest, searching for a place to hibernate during the winter. The queens hibernate when the cold winter arrives while the entire colony and nest eventually die.

Wasps seem to be dangerous insects that one may find in gardens. It can be good to know about the kind of pests which reside in your garden, so you learn how to deal with them. Baby wasps in your garden are small, with usually black and yellow stripes.

The lifecycle of a wasp begins in early springtime when the queen emerges from hibernation. Soon enough, the nest and the colony begin to grow quickly. However, as winter approaches, the queen wasp dies along with the rest of the colony. The cycle continues when the leftover queen wasps come out of hibernation in the spring.