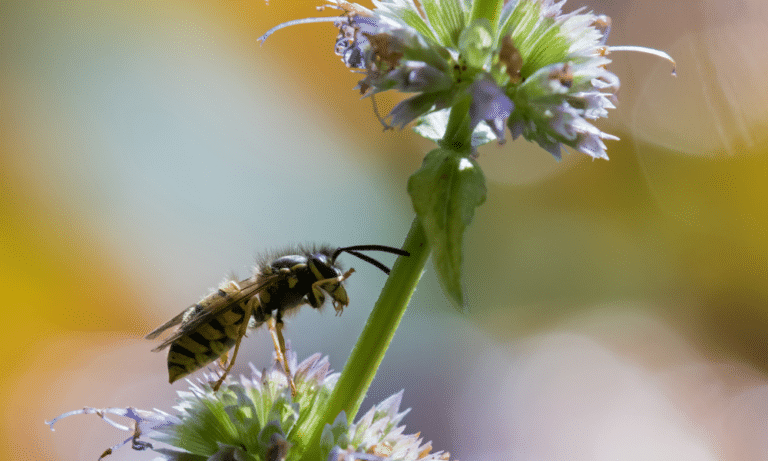 People are always on the lookout for ways to deter wasps. Since scent plays an important role, you can use smells that wasps hate to keep them away. But, what smells do wasps hate? And how do you go about using them?

There are a number of smells that wasps do hate. For example, wasps hate the smell of peppermint oil, strong herbs, geraniums and lemongrass.

One of the best ways to repel any insect is to use the smells they hate in your garden. You can incorporate these scents in your garden either by adding plants or by creating a spray.

While resorting to chemical pesticides can be your first reaction when dealing with any pest (including wasps), using natural ways is beneficial for the environment, is safer and is often cheaper too!

What Smells Do Wasps Love?

While it is important to know the smells wasps hate, it would equally help if you know about the smells wasps love. The reason is to avoid these smells or use them as bait to attract wasps and then kill them.

This is why wasps are drawn towards fruits. You will often see that wasps are prevalent in orchards where there are a lot of fruit trees. Similarly, wasps can also be found in your own garden if you have a fruit tree.

Other than the fruits hanging from the tree, wasps are drawn towards fallen fruit on the ground. Fruits that fall to the ground can rot over time. If you do not pick these fruit in time, they will attract more wasps as their sweetness is released and becomes more concentrated.

Wasps are also attracted to perfume. Wasps prefer perfume that has sweet notes to it, unsurprisingly. One of the reasons a wasp may linger around you is the perfume you are wearing.

If you’re eating outside then consider not wearing a strong perfume so you can enjoy your meal without being disturbed by a wasp.

Another smell that attracts wasps is that of vinegar. While we as humans do not like the smell of vinegar, wasps are attracted to it. In some cases, vinegar is used as bait to attract wasps to trap and kill them.

What Smells Do Wasps Hate?

Wasps often hate the smell of peppermint, in all forms, from plants to oils. You can use peppermint oil to deter wasps as it is a far more concentrated form of peppermint.

Peppermint oil does not cause harm to wasps, but it deters them. Hence, if you apply peppermint oil to an area, wasps will not get close to it. This is particularly useful for areas where you’re eating outside or to protect your wooden garden furniture.

The only problem with this method is that you will need to reapply the oil. If you wish to repel wasps, you need to be consistent with the application. You can create your own wasp deterrent solution by adding a few drops of peppermint oil to water and spraying it.

There’s no point wasting your time (and money) spraying your entire garden. Instead, think about where you want to prevent wasps from disturbing you such as outdoor dining areas, near the BBQ and by the backdoor.

While wasps are attracted to certain plants, they hate the smell of many herbs. If you wish to repel wasps, you can have some of these herbs in your garden. Some of the herbs that wasps hate include thyme, eucalyptus, wormwood, basil and mint.

You can have these herbs in a window box, throughout your garden or hanging on a fence where you want to deter them.

Ornamental plants will usually attract wasps; however, not all of them. There is one such plant that wasps hate that are geraniums.

You’ll want to use the bedding geraniums which are red-coloured flowers. These flowers have a strong smell that deters wasps.

Another effective way to deter wasps is to use bay leaves. Bay leaves have eugenol in them, which is an essential oil that repels wasps. You can use bay leaves by grinding them and scattering them in your garden. You can use the leaves, especially in areas where there are wasps.

One of the ways you can deter wasps in your garden is by using scents. To deter wasps altogether, it would help to use scents they hate. The smells that wasps do not like include herbs, peppermint oil, lemongrass and bay leaves.