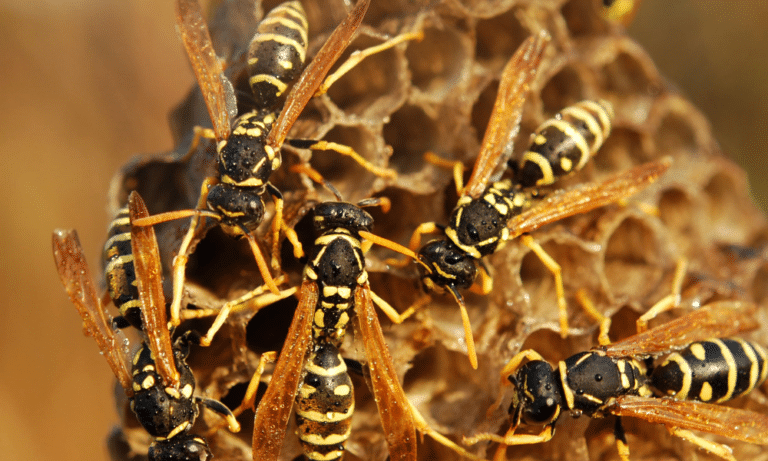 You’ll often see wasps flying around your garden as soon as the weather begins to warm up. But when are wasps most active? Is it during the summer months or at another time period?

Wasps are most active during the fall season when winter arrives as they hunt around for food to store during the cold months.

You may think that wasps are active the most during the spring and summer when it is warm. While you may spot plenty of wasps in warm weather, they can go about their business fairly carefree.

However, when fall arrives, wasps know that it will get cold soon; they will become more active in the food search to keep the queen alive. Wasps can be even more aggressive as they rush to build up their food stores.

So, when it comes to when wasps are most active, it depends on what you mean. You might see more wasps during the summer months but those alive during the autumnal period will be more active.

When are Wasps Most Dangerous?

Adult wasps will care for the larvae and care for the colony during the entire summer. Wasps will spend the summer feeding insects to their larvae.

When the fall time comes, the queen halts the process of laying eggs. With a lack of larvae, that produce honeydew, the wasps no longer have a source of protein in their nests and therefore have to look elsewhere.

As a result, wasps begin the search for other food sources. Wasps begin to go after sugar substances and human foods. It is during this time when wasps become the most dangerous.

These insects will look for alternatives and begin to get aggressive in their search. Therefore, wasps are likely to attack you. During this time, wasps become more protective of their nest and queen.

What Months Do Wasps Come Out?

It will help you understand wasps better if you know about their lifecycle and how they function overall.

The queen is already inseminated and will lay eggs in the nest. The eggs hatch, and the worker wasps come out. The worker wasps are infertile female wasps responsible for building the nest, expanding it for the queen to lay more eggs.

During May, the queen wasps will continue to lay eggs in cells. The eggs hatch, and the larvae feed on insects brought in by worker wasps. The hatched larvae become adult workers, and the process continues until the end of the summer.

By the time June and July arrive, the wasp nest is at its peak and is continuously growing in size. There are many adult wasps by July, and there are more in the eggs as the cycle continues. There are hundreds of worker wasps that go in and out of the nest to look for insects to feed the young larvae.

You will notice that wasps are becoming less active when the months of August, September and October arrive. The worker wasps begin to die, and the queen slows down, laying eggs.

During these months, the queen will lay eggs that are fertile. As the queen dies, the young females mate with the males and fly off.

What Time of Day are Wasps Most Aggressive?

Wasps are most active during the day like humans. However, wasps spend most of their time searching for food and working on expanding the nest.

Wasps spend the entire day working on their nest, and by the time summer ends, the colonies are at their maximum. In areas where it gets particularly cold, worker wasps will die when the temperature falls below freezing point.

However, the queens survive and hibernate through the winter, building nests during spring.

You will see wasps during the spring and summer seasons. However, by the time fall comes, wasps become the most active. The nest is populated, and wasps know that winter is about to arrive.

During the fall, wasps will search for food to keep the queen alive and will be more protective of their nest. During this time, wasps will become most dangerous due to a lack of food sources.

Wasps come out during the month of April when the queen wakes from hibernation and begins to build her nest. The best time to get rid of wasps is in April when the nest is not fully built.