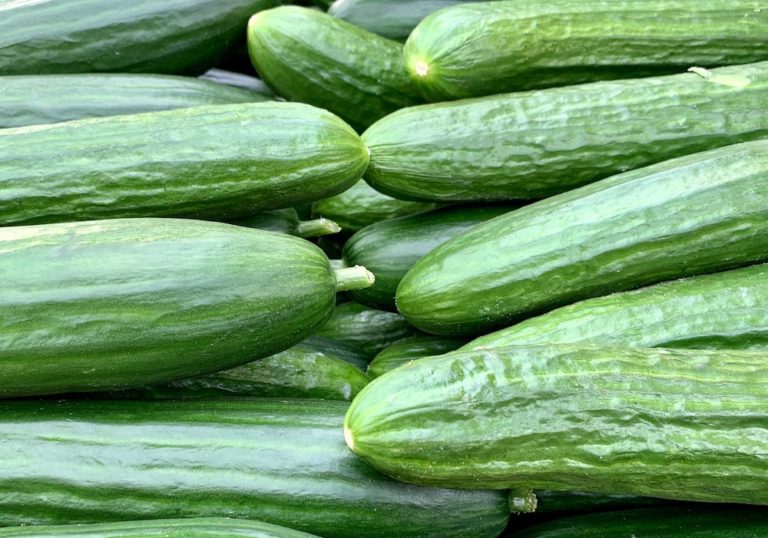 You may have seen many videos circulating on the internet starring cucumbers and cats. It seems funny to picture a feline fearing a vegetable. But why do cats hate cucumbers and how can that help us deter them?

Cats hate cucumbers because it reminds them of a snake. It would be better to say that cats fear cucumbers more than they hate them.

Cats have an inherent fear of snakes, and they avoid them at every opportunity.

Therefore, if cats ever cross a cucumber’s path, they become alert and panic. As a result, many people recommend planting cucumbers in gardens so cats avoid coming into them.

What Does a Cucumber Do to a Cat?

When a cat encounters a cucumber, it jumps out of fear. Cats will try to run away as far as possible from the cucumber.

Cats have such a strong reaction to a cucumber that they have become popular videos on the internet. The cucumber hack is great for people looking to keep cats out of their gardens.

Many gardeners complain about cats intruding and using their soil to poop. While there is no animosity towards cats, when they poop in the garden, it is bad for the existing plants and certainly a huge frustration.

Many people have resorted to keeping cucumbers in their gardens. After seeing the videos, people either grow cucumbers or buy fake ones.

If you grow cucumbers for the sole purpose of keeping cats out, you may not get to consume them.

The other drawback is that the cucumbers can turn bad quickly. Instead, you can get fake cucumbers that will last longer, imitate a real cucumber, and scare cats away.

Is Cucumber Bad for Cats?

Since cats fear cucumbers, many people wish to know if they are bad for them. Unfortunately, many plants deter cats, and at the same time, they can be poisonous to them.

However, cucumbers are not bad for cats. Cats are carnivores and are not naturally inclined to consume vegetables and fruits. However, there are instances when cats consume plants and vegetables.

Many cat owners have spoken about the benefits that cucumbers entail. But at the same time, these owners give cucumbers to their cats in a special manner by peeling and cutting them – when they no longer look like a snake!

You do not need to worry about planting cucumbers and cats becoming drawn to them. Cats are more attracted to plants with strong scents, and cucumbers have a subtle scent.

Having cucumbers in your garden is an easy way to keep cats out.

What Are Other Ways to Keep Cats Out?

There are other ways to keep cats out apart from using cucumbers. However, it is best to choose a deterrent that causes no harm to your garden or cats that visit.

It is a known fact that cats have a keen sense of smell.

Cats have odour senses which are 14 times stronger than humans.

If a scent seems strong to you, imagine how it must feel like to a cat. A great way to keep cats out is to use strong scents, particularly those cats hate.

Cats do not like citrus scents. You can use citrus fruits such as lemons, limes, oranges, and grapefruits. You can either make a spray using the juices or place peels in your garden.

Other strong-smelling things include spices like pepper. Cats hate the smoky and spicy smell. So you can either use black pepper, white pepper, or cayenne pepper. Cayenne pepper is a common ingredient found in cat repellents, which shows how effective it is.

In addition, cats do not like the scent of other animals as they are territorial. To make use of this, you can use lion manure which comes in the form of pellets. Upon smelling other animal’s manure, particularly of another feline, cats are likely to avoid intruding in your garden.

Cucumbers act as visual warnings to cats. You can also use a hosepipe that looks like a snake in your garden to scare cats.

If you are not keen on having these plants, you can use the classic way, which is using water. Cats hate water, and installing motion-activated sprays will help keep them away before they make a mess of things.

It may come as a surprise that a carnivore feline is afraid of a vegetable. Many videos on the internet show how cucumbers scare cats.

Cats fear cucumbers because they resemble a snake. All cats are naturally inclined to avoid snakes, and the sight of a cucumber throws them off. If a cat spots a cucumber, it will jump in the air with fear and panic.

Many people opt for growing cucumbers in their gardens to stop cats from entering and littering.

Other than cucumbers, you can also keep your garden hose among the plants, which will look like a snake. Likewise, you can grow plants like lavender which cats hate. Moreover, installing a cat repellent device is also a good idea. In addition, a water sprinkler that works by detecting motion will also keep cats away.