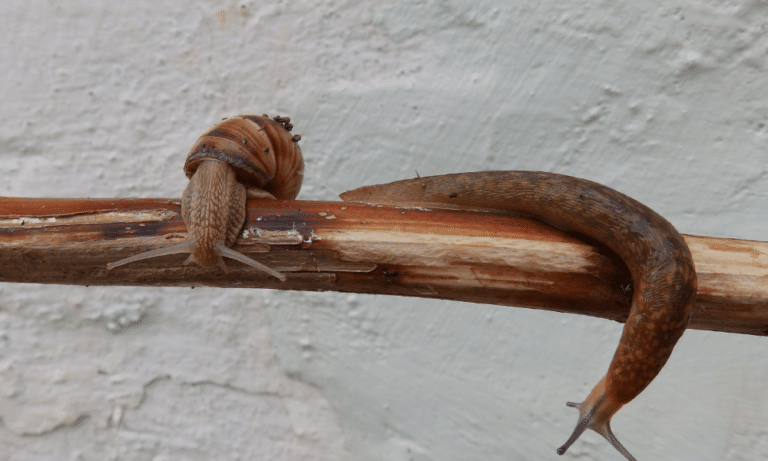 Slugs and snails are both garden pests, which are known to damage plants and create havoc. Many people can get confused between the two pests, thinking that a slug is a snail without a shell. But, are slugs and snails the same or not?

Slugs and snails are different animals, but they do have similarities. However, a slug is not a snail without a shell. There’s more to it!

While snails and slugs are similar, there is a major difference in the way they look. A snail has a shell. However, a slug does not. Both the animals glide and are slimy. The slime helps snails and slugs to glide and move across.

Snails and slugs consume plant material, but slugs also eat dead animal matter. A snail’s shell protects it and can get bigger as the snail does. Although this is the visual difference, a slug is not simply a snail without a shell.

Can a Snail Become a Slug?

Snails and slugs have such similar characteristics that many people wonder if they are the same. While a slug is essentially a snail without its shell, they still are different animals.

However, that does not mean that if a snail loses its shell, it will become a slug. In fact, a snail will die if it losses its shell.

A snail’s shell is like its body armour, protecting it from predators and the sun. A snail is born with its shell, which is an essential part of its body.

However, in the initial stages, the snail’s shell is soft and is not formed correctly. As time progresses, the soft shell takes its shape and becomes hard as the snail becomes an adult. As the snail grows in size, it can secrete new material, which forms the shell accordingly.

The snail’s shell is so important that when it breaks, it can die. If the snail experiences small damage, it can fix it. However, any large damage is a problem and can kill the snail. Not only does the shell act like armour, but it also prevents snails from drying.

How are Slugs and Snails Related?

Snails and slugs both belong to the group of animals known as molluscs. In this group, other animals you can find include squid and oysters.

Slugs have evolved from snails, and either they barely have a shell, or it is internal. There are certain benefits and drawbacks that slugs have to face as a consequence of evolving. While snails get protection from predators by hiding in their shells, it also prevents them from drying out.

When it comes to slugs, their shells are internal, which means they do not receive this protection and have a greater chance of drying out than snails.

However, as slugs have their shells inside, they require less calcium than snails. In addition, slugs have the chance of hiding in small places, like tiny holes, as opposed to snails whose shells prevent them from doing so.

How Can Slugs and Snails Damage Gardens?

You can tell that your garden has slugs and snails if the leaves and flowers have holes in them. Most insects become active after the springtime. If during this time you notice any damage, it can be likely due to slugs and snails.

The bulbs of plants will also have holes in them, and sometimes snails and slugs leave some slime behind. These animals work fast (even if they move notoriously slowly) and will attack any seedling in your garden by consuming them whole and leaving the stem behind.

You can confirm that you have these pests in your garden by going out in the evening and looking for yourself.

Not Just Plant Damage!
Apart from plant damage, slugs and snails are carriers of the dangerous parasite lungworm as they consume rat faeces. This can harm your pets if they consume the snails and slugs in your garden.

Slugs and snails are both garden pests that destroy plants. However, many people do not know the difference between these animals.

Slugs and snails are completely different animals even if they do share some traits. The only big difference that these animals have is that snails have a shell, while slugs do not.

But this does not mean that a slug can turn into a snail. Slugs have evolved from snails, and either their shell is too small to be noticed, or it is internal.