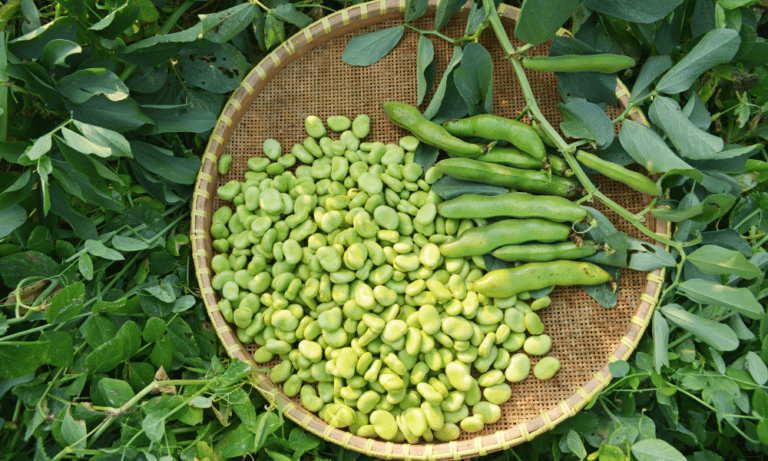 Slugs are some of the worst pests in a garden as they eat anything, but their main targets are root plants and vegetables. If you’re growing broad beans in your garden, you’d worry if the slugs would eat them? So, do slugs eat broad beans or not?

Yes, slugs can eat broad beans, but these aren’t at the top of their list of favourite meals. If there’s anything tastier, a slug will eat that rather than the broad beans.

Slugs are opportunistic eaters, meaning they’ll eat anything they come across in a garden. Slugs love eating many types of plants and can eat broad beans.

However, broad beans aren’t a favourite for slugs; they often eat other plants instead.

There isn’t anything that slugs don’t eat, but there are specific plants slugs like to eat over others. For example, you’ll find your broad beans untouched if you plant salvias besides them.

Broad beans aren’t at the top of the most favoured foods for slugs, so if they find something tastier, the slugs will eat that rather than the broad beans. The slug will gladly eat the broad beans if there isn’t anything good to eat.

Some people term broad beans as a slug-resistant veggie though slugs do eat them; it’s just that slugs don’t love them a lot, so they often will eat something else.

Broad beans are also quite good with bearing damage from slugs, but only if they’re established. Older plants will grow at such a rate that it won’t be much of an issue from slugs.

Yes, broad beans seedlings are most susceptible to slug damage. They’re tender and have not established themselves enough to repair damage from slugs. Growing broad beans undercover initially is a great way to combat this damage.

Slugs can eat broad beans, but as these beans aren’t a favourite for slugs, they often eat other plants that they find tastier and ignore the broad beans.

Unfortunately, slugs aren’t the only pests in your garden that can eat broad beans. Other pests might be even a bigger problem than slugs.

Besides slugs, the other pests which munch on broad beans are aphids, cutworms, capsid bugs, and snails.

Mice also tend to dig up broad beans and eat all of them. Another type of insect that can eat broad beans is blackflies. Blackflies suck the sap from plants; they can be a major problem for broad bean plants.

It can damage younger plants, but for an older plant, the damage isn’t that bad and doesn’t affect its growth.

How Do You Protect Broad Beans from Pests?

To protect your broad beans from all the pests in your garden, the first thing you can do, which is also the easiest, is only plant them outside when they’re all grown and established.

Although pests will still attack established plants, they tend to have the resources to outgrow any damage inflicted on them.

You can also use a half-pop bottle as a miniature greenhouse to keep many pests away from your plants.

Another tip is to water the plants in the morning. Many pests such as slugs come out at night, and slugs love moisture and avoid dryness. To avoid dryness, they won’t crawl on dried soil.

Other Methods to Deter Pests from Broad Beans

For slugs and snails, using pellets is an effective and classic way to kill off slugs. This may be an effective method for a pest-free garden, but the pellets can be dangerous if you have kids or any pets.

The pellets can also be dangerous to a slug’s natural predator. Hedgehogs often eat dead slugs and are killed by pellets, digesting them themselves.

Using Nematodes is a natural way of killing many pests in the soil. Nematodes are a diverse variety of tiny parasitic worms in your soil, they naturally live in the soil, and you can add more of them to the soil to get rid of any pests.

Another advantage of using nematodes as a pest deterrent is that for slugs, nematodes kill them in such a way that they burrow into the soil, dying in it so you won’t have any dead slugs on the soil.

You can also use various animal traps for various pests in your garden. For slugs, the most commonly used trap is a beer trap. To set up a beer trap, you set a container, level the soil, and put beer in it.

The slugs will be attracted by the scent, fall in the container and drown in it. You can take the container out, dispose of the dead slugs and refill it with beer again.

Pests can cause a lot of chaos for your leafy greens, and slugs are one of the most despised pests for gardeners. These slimy creatures can eat a lot and munch on almost any plant.

If you’re worried about broad beans being slug food, then you don’t have to worry too much as slugs, even though they eat broad beans; will ignore them if they find anything else to eat, as broad beans are some of their least favourite plants to eat.

Besides slugs, many other pests eat broad beans, such as aphids, mice, weevils, snails, and capsid bugs. You can protect your broad bean plants by many methods, such as by using traps, pellets, or using a natural way like nematodes in the soil.