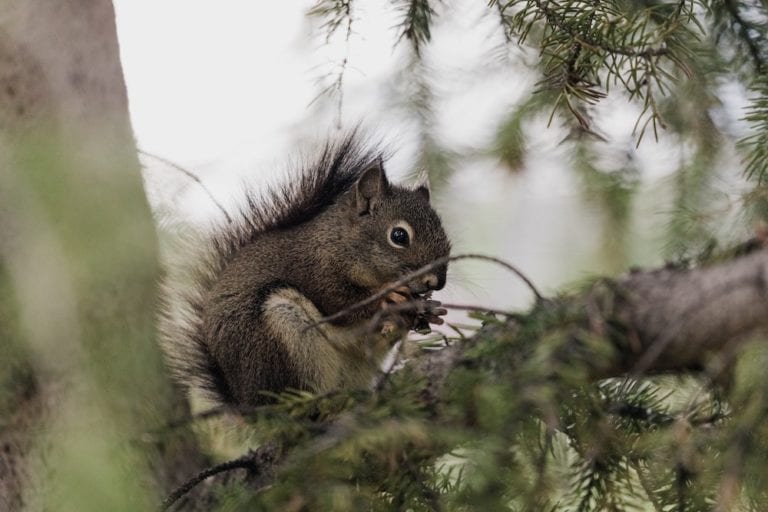 You often see squirrels munch away on plant materials, bird seeds and (of course) nuts. So, are squirrels herbivores or can they also be found eating animal matter?

No, most squirrels are not herbivores. The majority are, in fact, omnivores as they consume both plant matter and meat.

Are Squirrels Herbivores, Omnivores or Carnivores?

In fact, if you observe a squirrel in your garden, you’ll very rarely see them trying to eat any bugs or insects. Instead, they will spend most of their time eating plant-based matter if it is readily available to them.

Squirrels are Omnivores
Against popular belief, the majority of squirrels are not herbivores but are, in fact, omnivores as they will eat some animal matter and insects.

Grey squirrels are not herbivores. They are omnivores like most other species of squirrels. Although they may eat the odd insect or young bird, their diet consists mainly of plant-based items.

They will usually be found eating plant bulbs, acorns, fungi, nuts and seeds.

Red squirrels, like grey squirrels, are not herbivores but are omnivores. Their diet is varied and can include fruit, nuts, seeds, fungi, bark, insects, young birds, mice, other small rodents and eggs.

It’s safe to say that red squirrels are far from fussy!

Are there any Herbivorous Squirrels?

Most species of squirrels are omnivores, but there are some lesser-known squirrel species that are herbivores.

In fact, most squirrels live the majority of their lives are herbivores as they will and can survive solely on plant-based foods. Squirrels will eat animal matter if plant-based food is unavailable.

Are there Any Carnivorous Squirrels?

There are not any UK-based squirrels that are carnivorous. There is, however, a reputed carnivorous squirrel (nicknamed the vampire-squirrel) that can be found in the lowlands of Borneo.

This has not been scientifically confirmed, however. Besides this species, there are no other known carnivorous squirrels as the majority enjoy a plant-based diet.

Do All Omnivorous Squirrels Eat Meat?

This may seem like a weird question to look into. If squirrels are omnivores then surely, they will eat meat.

Actually, many squirrels have the capacity to eat meat but will go throughout their lives subsisting on a plant-based diet. While insects provide a high amount of protein, they do not seem to be as appealing to squirrels.

They are also harder to catch, and they cannot be stored for future consumption. This means that the energy expended to obtain insects often outweighs the benefits.

Many squirrels species will consume a herbivorous diet unless they have no available food sources or are very hungry. Generally speaking, squirrels have become well-prepared for winter months by storing nuts and seeds in the ground which is why they’ll rarely have to fall back on eating meat.

What Do Squirrels Primarily Eat?

Many squirrels have a wide-ranging diet, and most are opportunistic.

Basically, if a squirrel can eat something, it most likely will eat it. That being said, squirrels often have main diet components which they stick to and gain most of their nutritional requirements from.

These food items include:

Seeds appear to be a favourite snack of the squirrel. They mainly seem to enjoy black sunflower seeds and will also eat pumpkin seeds. Seeds provide them with a lot of energy, but they do not provide enough protein to exist as a squirrel’s sole diet.

Nuts provide a large amount of fat for squirrels which is great for when food sources are scarce. You will mainly see them eating nuts around winter and in the early spring.

This is why you’ll often see squirrels performing an acrobatic show to make their way to any bird feeders you may have in the garden.

Most squirrels do not choose to eat insects. They usually act as a substitute for when food is scarce. Insects also provide them with a large amount of protein, meaning they can be useful for growing squirrels.

Squirrels will eat much more than the foods listed above. They’ll even eat branches and bark! but these seem to be the main aspects of a squirrel diet.

What Can Impact a Squirrel’s Diet?

Whilst squirrels will primarily choose their favourite foods or get their hands on whatever they can, some things impact what a squirrel will eat throughout its lifetime.

Put simply, squirrels will eat whatever food is available to them. If there is a shortage of nuts, then squirrels will consume fewer nuts etc. A lack of food also encourages squirrels to spend more time hunting insects.

Time of the Year

This can also impact the food availability of squirrels. As the seasons change, so do the diets of squirrels. For example, they will eat foods with higher levels of fat during the winter months to keep warm in the cold.

Climate change primarily impacts the two reasons listed above. Because of environmental changes, the seasons have been shifting along with the growth times of flowers. This is causing squirrels to have to adapt and can cause severe food shortages in particular months.

Squirrels will also evolve to eat new things, but that usually takes place over many different generations. The requirement for evolution is also usually as a result of these environmental impacts listed above.

To conclude, let’s look over the main points of interest in this article. Squirrels are mostly omnivores though some are herbivores.

Some omnivorous squirrels follow a herbivorous diet because it is easier and more desirable to have plant matter such as seeds. Most squirrels will only eat meat if other sources of food are scarce.

There are one reported species of carnivorous squirrel although, chances are, this species is also omnivorous as no scientific study has been completed to prove otherwise.

A squirrel’s diet can be impacted by the environment, including seasonal changes and climate changes.