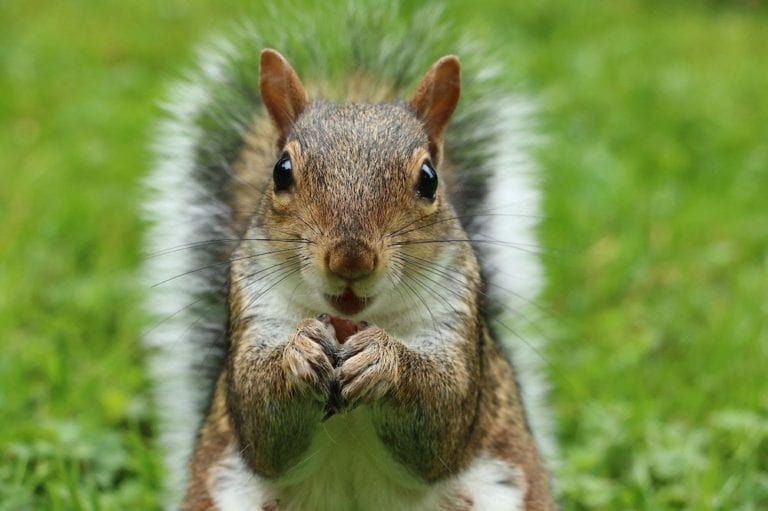 Squirrels have an insatiable diet, but does this make them carnivores?

No, squirrels are not carnivores. They are, in fact, omnivorous. This means they will eat anything, much like humans, including both plant matter and meat.

Squirrels are rodents and these mammals are not, in fact, carnivores. They are actually omnivorous. This means that they will eat practically anything they can and that their diet is made up of both meat and plant matter.

Humans are also omnivores, so squirrels are similar to us in that sense.

What do Squirrels Eat?

Whilst squirrels are opportunists and will eat whatever they can, they do have food preferences. As well as this, their diet does not encompass every aspect of food. So, let’s have a look at their diet in a little more detail.

A primary component of a squirrel’s diet is seeds. They particularly enjoy black sunflower seeds, and this is why they are often seen trying to get food from bird feeders. Seeds provide them with a lot of energy and can be very beneficial to squirrels.

They aren’t particularly fussy though, when it comes to seeds, and will often be found eating any seeds from your feeder including pumpkin seeds.

Squirrels are a big fan of nuts. They will eat monkey nuts, hazelnuts and almonds – just to name a few. Nuts are particularly great in winter as they provide squirrels with a lot of fatty energy.

They will usually only eat insects if their usual food resources are limited. That being said, they have been known to eat caterpillars, crickets and certain species of larvae.

Squirrels do not appear to enjoy meat as much as they enjoy the plant matter that they are known to consume.

Whilst it is not confirmed for every species of squirrel, it appears as though consuming animal matter is usually a last resort when food sources are scarce. This may be in the months of spring when the foods squirrels eat have not yet grown to fruition.

Are all Squirrels Omnivores?

There are hundreds of species of squirrels and the diet of individual species can vary quite largely. In fact, most squirrel species are not omnivores and actually follow a herbivorous diet.

This includes the common grey squirrels which you may find in your garden. They have, however, been known to consume a large number of songbirds if required and if not other food is available.

Most squirrel species have evolved to be able to consume animal matter, such as insects, but they do not actually do so and instead consume only plant matter meaning they could easily be classified as herbivorous.

Are there Carnivorous Species of Squirrel?

There does not appear to be a species of squirrel that is completely carnivorous. However, it is possible that there may be an undiscovered carnivore squirrel which will be a revelation for scientists in the future.

But, for now, there are no species of squirrel that will solely consume animal matter. The ones that do still seem to have a preference for consuming seeds and nuts.

Is the Vampire Squirrel Carnivorous?

Hearing the name Vampire Squirrel, you would surely think that if any species were to be a carnivore it would be this. Well, actually, the species is omnivorous and seems to prefer consuming seeds above all else.

The official name for the Vampire Squirrel is Borneo’s Tufted Ground Squirrel. They have a very specialised diet and feed mostly off of one particular type of seed that nothing else in the forests appears to eat.

So, if this squirrel eats seeds, how did it get the name of Vampire Squirrel? This is because hunters have come across disembowelled deer with slashes across its neck and none of its flesh consumed. This is apparently a favoured hunting method of squirrels when they actually need to eat meat.

Despite the speculation, it has not been confirmed if this squirrel actually does eat deer and drain them of their blood. But it does make for a rather spooky forest tale.

We’ve established that squirrels are not famed hunters or carnivores. But they themselves can be prey to other carnivorous species. Some species that have been known to eat squirrels as part of their diet are listed below.

Red foxes are urban hunters, and with squirrels also frequenting urban areas such as gardens, they make good prey for the fluffy-tailed hunter.

Both domestic and wild cats have been known to hunt squirrels. If there is a dead squirrel in your garden, then it is not out of the realm of possibility that either your own cat or a neighbour’s cat has been the culprit.

In the wild and in forests close to riverbanks, weasels are one of the primary hunters of squirrels. They are actually very helpful in controlling the population of grey squirrels.

There are other species of animals that will hunt squirrels, but these are some of their more common primary predators.

To summarise what we have learnt, squirrels are not carnivorous but in fact omnivores. Most squirrels follow a herbivorous diet and will only consume animal matter such as insects if necessary.

There are no species of purely carnivorous squirrel, even the vampire squirrel is not actually a carnivore. The main dietary components for squirrels are seeds and nuts. Squirrels are themselves, prey for carnivores including foxes and weasels.