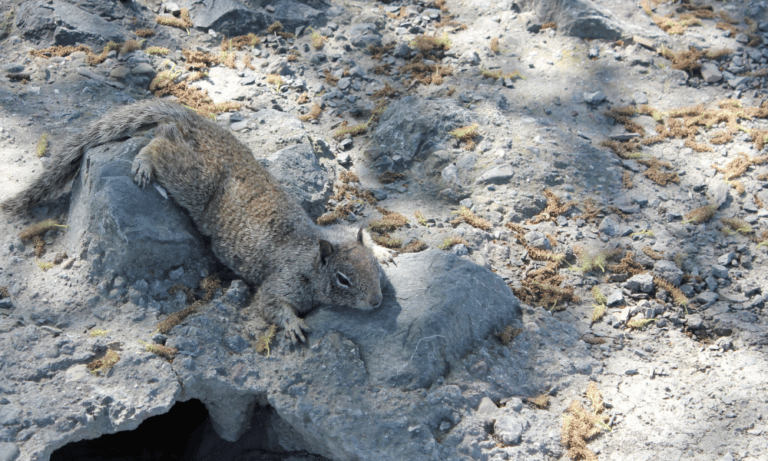 Several animals pretend to be dead to fool predators that don’t feed on already dead animals. Many predators avoid eating animals that they haven’t killed. Some rodents use these strategies, so do squirrels play dead when a predator approaches?

No, squirrels do not play dead as some other animals do. Instead, they lay flat on the ground, completely motionless to go undetected.

An animal plays dead by laying on its back or side. Instead of doing this, squirrels take a different approach. They lay on their stomachs motionless, and as their colours blend with their surroundings, like trees and the ground, their camouflage is near perfect, so predators don’t see them.

This doesn’t mean that they’re dead or sick. They’re simply avoiding being spotted by the predator.

They also lay on their stomachs rather than on their backs because the whites of their fur stand out. Laying belly first allows only the fur that is the same colour as the ground to be visible.

A squirrel will stay motionless in this position until the predator has passed and disappeared into the distance and the squirrel isn’t in the predator’s eye line.

Many animals are known to play dead, including foxes, ducks, possums and mantis. They do this to avoid being attacked by predators. 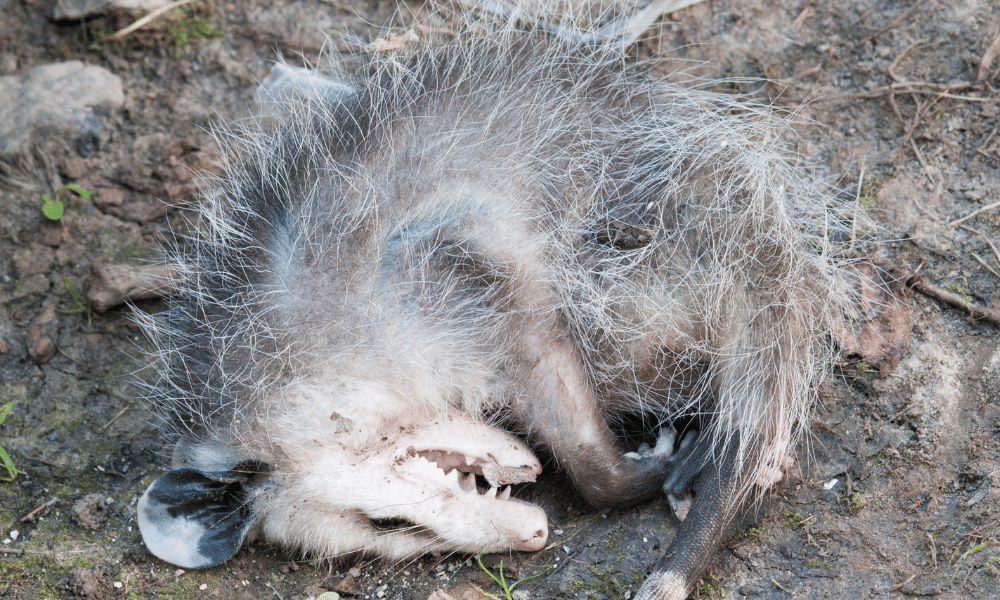 Why Do Squirrels Lay Flat on the Ground?

There are a number of reasons for a squirrel to lay on the ground. They might be hiding from predators, they might be trying to cool their bodies down or they might be resting.

How Do You Know If a Squirrel Is Dead?

A healthy squirrel runs around frequently and is fast and agile, but there are times when a squirrel may not act like it normally does, so you wonder if it’s sick or dying.

It’s hard to tell if a squirrel is dying or is sick as squirrels, generally, don’t show any signs of being sick. Nothing is much different in a squirrel’s appearance that’ll hint that the squirrel might not be healthy.

The indications of a squirrel that is about to die include spasms or seizures, skin abnormalities such as spots or patches of bare skin where there is no fur, passing blood or diarrhoea, visible tumours on certain parts of its body, rashes or discharge leaking out from their eyes.

But what happens once they’re dead… How do you know that a squirrel is actually dead?

The smell is an important indication that a squirrel might be dead. If there is a strong, unpleasant odour from the squirrel that you suspect is dead, then it is dead and has begun decomposing.

Many flies buzzing in the area are an obvious indication of a dead squirrel.

The other, obvious, thing to look for is any movement. If you make a small noise near the squirrel, you would expect it to move. Squirrels are very alert. If there is no sign of movement then chances are it is dead.

Squirrels normally live up to 12 years on average, with many dying simply of old age.

How Do You Know If a Squirrel is in Shock?

It’s easy to figure out if a person is in shock but how can you identify if a squirrel is in shock?

A squirrel can get in shock if it’s startled by a predator or experiences trauma, for example, falling from somewhere very high such as a power line or a tree.

A squirrel can also get in shock if it’s suffering from something internal. If a squirrel has a problem with its blood flow, it will get into shock.

You can figure out if a squirrel is in shock if it’s cold, especially on the legs and paws or when a squirrel is only moving its eyes while it has a blank and dulled dazed expression.

This means that the squirrel is shocked due to a predator startling it or you startling it.

A normal healthy squirrel is very active, but if you sense that a squirrel isn’t acting like it often is, the animal may be in shock. A squirrel’s heartbeat and breathing may speed up or slow down when in shock.

Another identification that a squirrel may be in shock is that its eyes may seem dull, tired, or dry, when they are normally bright and alert.

Unlike other mammals, like mice and bats that sleep through the winter, squirrels do not hibernate. Squirrels don’t hibernate as they physically aren’t capable of doing so.

They cannot hibernate because they can’t retain enough body fat to survive through the winter, mainly because they’re agile animals that jump from branch to branch and keep on running. They burn through their fat reserves too quickly.

A squirrel can collect three years’ worth of food and store it in varying locations to keep it safe. But they need to remain awake to consume this stored food.

Several animals resort to a strategy where they pretend to be dead until their predators are gone.

Although squirrels are small and defenceless like other animals that play dead, they don’t pretend to be dead. Instead, they use a different strategy where they lay on their bellies and blend with their surroundings to fool the predator that they’re not there.

Certain things can help you confirm when a squirrel is dead, such as flies or smells. On the other hand, a squirrel in shock will look odd and behave oddly as well. Squirrels don’t hibernate. Instead, they gather enough food to pass the winters.