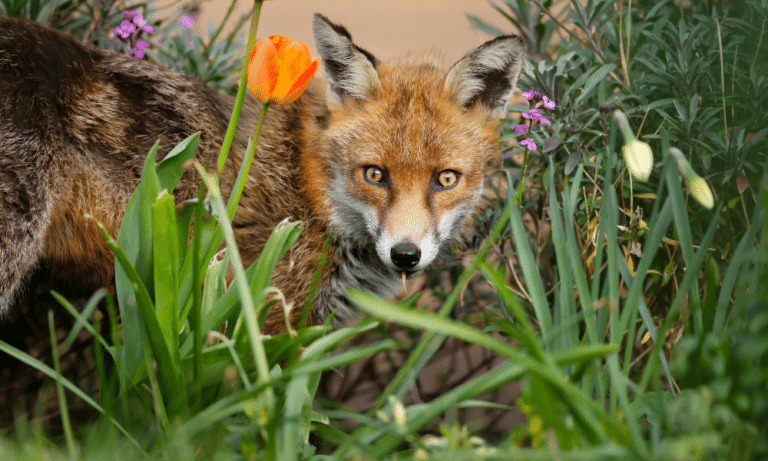 Slugs are a real pain to deal with in the garden. However, one of the easiest ways to get rid of them naturally is to encourage slug predators into your garden. So let’s take a closer look at one of those potential predators and consider: Do foxes eat slugs or not?

Yes, foxes do eat slugs as part of their diverse diet.

Foxes are one of those animals who have a widely varied diet. Foxes will eat all sorts of things, including small animals such as rabbits and rodents to insects such as slugs.

Do Foxes Eat Snails Too?

Yes, foxes will eat both slugs and snails in your garden. Foxes aren’t particularly fussy with what they eat so will happily chew up a snail (shell and all!) in a matter of seconds.

If you know anything about foxes, you’ll know they’ll eat anything. You could leave out leftover vegetables from your dinner, a chicken carcass or a bowl of bread and a fox will come along and eat it.

What Other Insects Do Foxes Eat?

As aforementioned, foxes follow a varied diet and are opportunistic animals. Apart from slugs, these animals eat other insects too. A fox’s priority will be getting meat to eat; however, they will resort to consuming other things if they cannot find a full meal of meat.

Foxes eat insects including beetles, caterpillars, grasshoppers, and crickets. They’ll also consume snails and worms. Ultimately, a fox will eat whatever it needs to in order to survive.

How to Attract Foxes to Gardens

A way to tackle your slug problem efficiently is to attract foxes to your garden.

Animals are always looking for water to drink. Therefore, one of the best ways to attract foxes is to leave out fresh water for them. You can also leave out food, which will attract them in the first place.

Ideally, you should put out food to replicate the fox’s natural diet. You can provide protein in the form of cooked and raw meat, dog food, or special fox food. Foxes are not picky and enjoy consuming anything from cheese to fruits and nuts.

Why You May Want to Avoid Attracting Foxes

One theme you’ve probably learnt from this page is that foxes will eat anything. They are opportunistic and if they come across anything that may be a meal then they’ll go for it.

And this is why having foxes in the garden could be more of a hindrance than a benefit, even if they do eat slugs.

If you keep chickens, have pets, or simply want to encourage wildlife such as hedgehogs, frogs or birds into your garden then having a fox in the garden is only going to be negative. Foxes will attack all of these.

There is also the added negative that leaving out raw meat and dog food for foxes can also lead to rats. Attracting rats, in any case, is a disaster. Would you rather have a rat problem or a slug problem?

But the bad news doesn’t end there! If you have a rat problem then you’ll also attract slugs. Slugs eat rat faeces so, before you know it, your problem will begin to spiral out of control. Perhaps it’s not the best idea to attract foxes into your garden unless they come to your garden naturally?

Foxes, along with other animals, consume slugs. Sometimes, the best way to get rid of slugs in your garden is to let the natural predators do their part. Just leave nature to do its thing.

You can invite foxes to your garden by putting out food and water for them.

Apart from foxes, you can also attract other animals to your garden. For instance, birds, hedgehogs, beetles, toads and frogs are all slug predators that can help control their population.

But remember that foxes will eat anything and everything they come across. This is why it’s not necessarily a good idea to attract foxes for slug control as they will also eat or attack other slug predators such as birds and hedgehogs. Maybe reconsider attracting foxes to your garden and instead focus on attracting other predators (we’ve listed a few here).