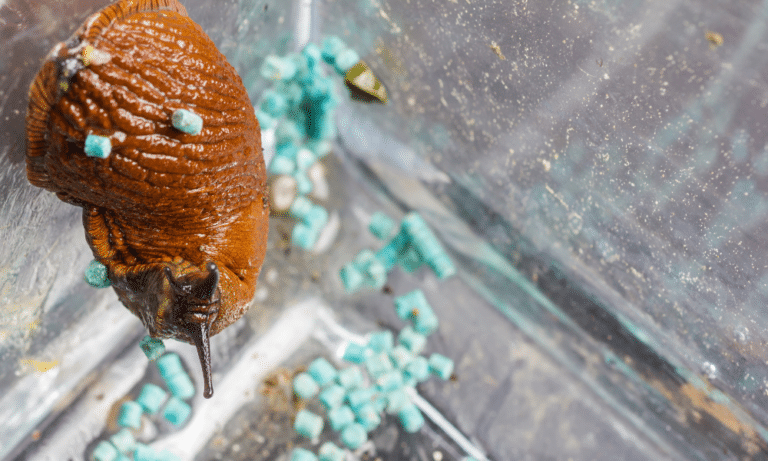 One of the most prevalent practices which gardeners use to get rid of slugs is to use slug pellets. However, recently, slug pellets have been banned for various reasons. So, why are slug pellets being banned then?

Slug pellets are being banned because of the harm they cause to wildlife and the environment.

Metaldehyde, a dangerous chemical, is the main chemical component of a range of slug pellets. However, these pellets are being banned as they threaten wildlife and the wider environment.

Metaldehyde works to kill slugs by dehydrating them. However, this chemical affects animals differently by attacking the nervous system. Many slug predators, like hedgehogs and birds, are facing a population decline. Some people put this decline down to them accidentally consuming slug pellets.

This is why countries across the world are banning the use of slug pellets. The UK government recently announced a ban:

The outdoor use of metaldehyde, a pesticide used to control slugs on farms and in gardens, is set to be banned in Great Britain from the end of March 2022 in order to better protect wildlife and the environment, farming Minister Victoria Prentis announced

Why are Slug Pellets Harmful?

Before we learn why slug pellets are harmful, it is important to know how they work. There are two kinds of slug pellets that are available in the market.

The first kind of slug pellets includes methiocarb, which kills slugs by making them swell. Slug pellets like methiocarb are dangerous as they also kill beneficial insects and worms. Many countries have already banned the use of methiocarb as a pesticide.

The second type uses metaldehyde. Despite being less poisonous than methiocarb, these slug pellets still cause great damage to gardens and the environment. Metaldehyde affects slugs by making them produce excessive slime. As a result, these slugs die from dehydration.

Unfortunately, slug pellets aren’t just lethal to slugs but can be detrimental to the health of others:

When you use slug pellets in your garden, you are putting your pets and those who come to your garden at risk. Animals, whichever they are, are curious by nature. Therefore, it is highly likely that your pets will be attracted to slug pellets because they resemble kibble.

If your pet ingests these pellets, it is likely to die or fall severely ill. Your pet only needs a few slug pellets to kill it. Also, it is not only your pet at risk but others who may come to your garden.

The biggest reason why slug pellets are being banned is that they affect wildlife. Slug pellets are a big threat to wildlife, but people still use them as a way to kill slugs.

Slugs have many natural predators that consume them, such as hedgehogs and birds. These predators ingest the poison by consuming poisoned slugs. As the animals are small, even a small amount of poison is dangerous for them.

This is, unfortunately, even the case for dead slugs. The slug might be dead but the chemical is still very much inside their system.

In addition, wildlife is also known to consume slug pellets directly. This is why in recent years, the population of slug predators has faced a significant decline.

Consuming slug pellets is incredibly dangerous for children and it can kill them. Moreover, even if you have these pellets at home, your children can still reach for them. It is important to place these pellets in places out of the children’s reach.

Gardeners widely use slug pellets to deal with slug infestations despite the damage they cause to other animals and the environment.

However, recently slug pellets have been banned because of the damage they cause to wildlife. Slug pellets contain metaldehyde which kills slugs by dehydrating them. However, in mammals, the chemical works by attacking the nervous system.

There are many slugs predators, like birds and hedgehogs, that indirectly or directly consume the chemical in slug pellets. Slug pellets are also harmful to pets and children. Both parties are curious and can ingest the pellets if they encounter them.

There are some alternatives to the traditional slug pellets which you can use. For instance, you can use beer traps, garlic, coffee grounds. You can also use organic pellets made from sheep’s wool. These pellets are safe around wildlife and pose no threat to the environment.