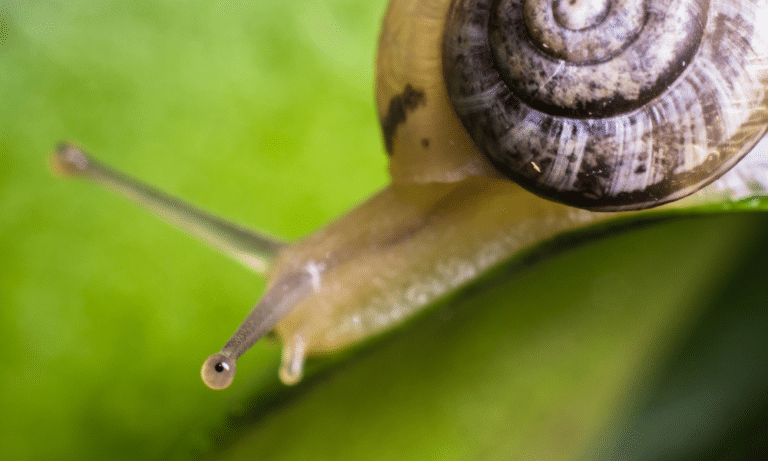 As a gardener, you’ve probably got up, close and personal with snails as you pick them off your plants and get rid of them. As you get close, you will notice a snail’s physical features, particularly its tentacles. But, do snails have eyes or not?

Yes, snails do have eyes. They have eyes at the end of their tentacles.

If you look at a snail carefully, you will notice that it has eyes at the end of its tentacles. Snails have tentacles that they are able to retract. There are two pairs of tentacles on the snail, and the longer of the two are responsible for sight.

Snails do not rely on their sight as much as their sense of smell. Snails can also regenerate their eyes if the stalk is amputated.

How Does a Snail See?

Although snails have eyes, they do not rely on their vision because they actually have poor eyesight.

A snail’s eye includes a transparent cornea, eye capsule, secreted lens, and retina. The snail uses the lens in their eyes to see. However, lack the ability to focus on an object.

Therefore, snails can draw a rough outline of the object in front of them. But, they cannot clearly see them.

How Well Can Snails See?

It would be unfair to compare a snail’s sight to humans. Snails have poor vision, and they are unable to detect objects, especially at close range. Some snails can differ between dark and light while others can tell where their prey is.

However, every snail species will have a different sense of sight. Generally, carnivorous snails will see better than garden snails because they require good hunting vision. Snails are also unable to detect colour in their surroundings.

How Many Eyes Do Snails Have?

Snails are able to get a wider view of their surroundings because they can move their eyes with their tentacles. Snails do not have muscles like humans, which allow us to focus on objects.

Snails are not blind, but they do have poor vision.

The good news for them is that they do not solely rely on their ability to see. Snails can easily survive in their environment through their sense of smell and touch.

Snails have neurons all around their bodies, enabling them to sense light. For instance, snails will get in the shade or inside their shells as soon as the sun hits them.

Can Snails Grow Their Eyes Back?

When other animals lose their eyes, we know that it has to live with it. However, this is not the case with snails. These slimy animals do not rely on their vision; therefore, not having eyes does not affect them much.

Snails are fascinating animals that you will certainly spot in your garden. Upon closely observing them, you may notice two pairs of tentacles on their heads. The longer pair of tentacles is known as the snail’s eyes. The eyes are located at the end of the stalk.

However, snails have poor vision and cannot see well. These slimy pests cannot form images and see blurry objects only. If a snail amputates its stalk, it can grow it back. However, even after fully recovering its eye, it may not be able to see.

Some snails are born blind, while others do not have eyes. However, this does not bother the snail because it is dependent on its other senses, like the sense of smell, to navigate. Even if a snail is blind, it can still sense light like the sun and hide.

Snails have the ability to view a wide image of their environment. Because they are on tentacles, they can easily move their eyes around without having to move their entire body.