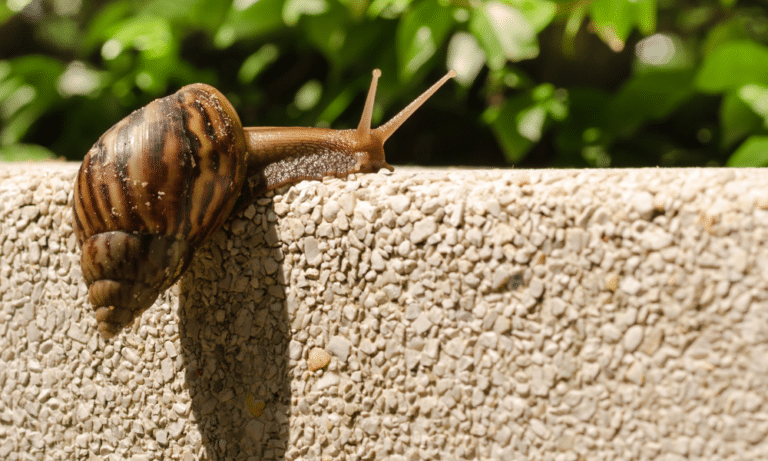 You probably know what a snail looks like with its iconic shell on its back. But are snails born with shells or do they develop them later in life?

Yes, snails are born with shells. Their initial shell is soft but as the snail matures, it hardens to become the shell you are familiar with seeing.

The shell continues to grow in size along with the snail. All snails will have a shell on their back, as this is what sets them apart from slugs.

Can a Snail Survive Without Its Shell?

A snail’s shell is important to its survival. If a snail were to lose its shell, it would have a hard time staying alive, and it will die.

The snail’s shell is like armour that protects it from getting hurt. If the snail suffers damage to the shell and this damage is small, it can recover from it.

However, if the damage is big, snails will not be able to fix it and will die. The snail’s body is soft, and the shell protects it from sharp objects.

Other than protection, the shell will also prevent the snail’s body from drying out. Without the shell, the snail is left in direct heat.

Can a Snail Remove Its Shell?

A snail is born with its shell, and it has been attached to it since day 1. As the snail grows, so does the shell on its back. A snail does not outgrow the shell, nor can it remove it.

Are Snails Born Without a Shell?

When snails are born, they have tiny shells on top of their bodies. From the very beginning, snails have shells, and they are attached to them. When the snail grows in size, so does its shell.

Initially, the shell is soft and small and is not formed completely. However, as the snail matures, the shell becomes hard and begins to grow. Snails secrete a material as they grow to enable the shell to expand as they do.

How Do Snails Grow Their Shell

The calcium carbonate layers begin building up with time, making the shell larger and expanding it for the snails to live in. If you take a look at a snail’s shell closely, you will notice the rings, which indicate how long the snail has been alive as it keeps adding to the shell.

Can Snails Hide in Their Shell?

The shell not only protects the snail’s soft body from harm but provides it with a home. Snails can use their shell to hide from predators. When a snail feels threatened, it will hide inside its shell.

It is difficult for snail predators like birds to get inside the shell. These predators will often leave the snails alone and avoid the hassle.

Are Snails Just Slugs without a Shell?

Snails and slugs are similar creatures. Both animals are gastropods, but the one difference is that one has a shell while the other does not. The simplest way to describe a slug would be to call it a snail without a shell.

However, these two animals differ from each other in various ways.

There are certain similarities between the two animals, which can lead people to think that slugs are snails without shells. Both snails and slugs come out during the nighttime. And both snails and slugs prefer to stay in the shade and avoid the sun.

The most distinguishing feature of a snail is the shell on its back. But are snails born with their shell or do they grow it as they mature?

Snails are born with shells, but they are small and soft. When snails mature and grow, the shell grows too. The shell will harden and take proper form. Snails have a gland on their shell that secretes calcium carbonate. This enables the snail to expand the shell.

Snails cannot live without their shells and will die if they lose them. A snail’s shell is important in protecting its soft body and preventing it from drying up. Moreover, while slugs can be labelled snails without shells, they are different animals.