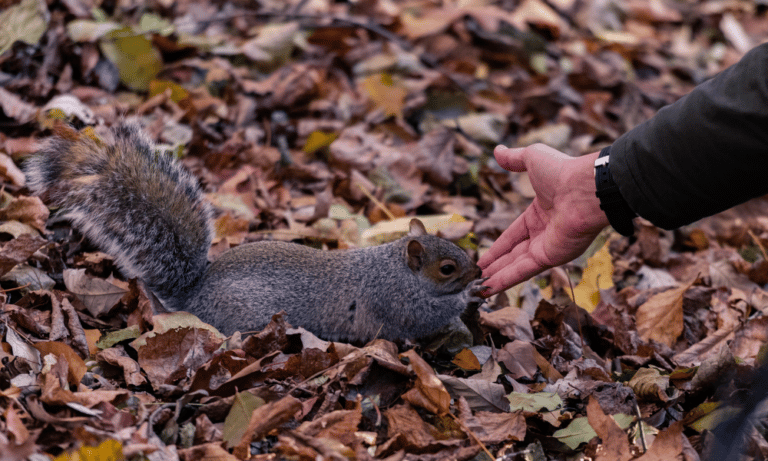 Squirrels are considered pests mainly because they make a mess out of people’s yards and annoy birds looking for food. Squirrels have a very cute and approachable appearance. They’re fluffy, have bushy tails, and eat cutely. So, are squirrels friendly, or is it only their appearance?

Yes, squirrels are friendly animals and get even friendlier once you feed them. Most squirrels are very used to being around people that they’ll even eat from your palm.

Only a handful of wild animals are approachable and may go near people. Squirrels, though, are very friendly animals. Some squirrels are so friendly that they will eat from the palm of your hand with no worries.

Like most animals, if you feed a squirrel, it will think of you as a food source and will be friendlier. It will also come to you looking for more food. When animals eat the food people give, they think of them as a trustworthy food source.

Is It OK to Touch a Squirrel?

As much as you want to pet the cute little squirrel that came to you asking for food, it’s not a good idea to touch it. No matter how you want to pet or touch a squirrel, they’re wild animals that interact and live with other wild animals, and touching or petting them could be risky.

Squirrels use very sharp claws to climb trees and other surfaces. These claws also make it unsafe to touch them. If you hand out food or try to pet or touch them, they could accidentally scratch you, and squirrels, like other wild animals, can get easily agitated, making them not the safest animals to pet or touch.

Another risk to touching a squirrel is that they’ve been around other wild animals and have interacted with animals that may have diseases in the wild. There could be a possibility that the squirrel would be carrying diseases also. Squirrels can carry diseases such as leptospirosis and typhus and can also carry parasites like fleas or ticks.

These diseases and parasites can drastically affect your health, so touching, petting, or even feeding a squirrel by hand can be risky if you still want to do it. Proceed with caution. Wild animals are mostly left alone for the main reason being wild.

When grabbing squirrels, the same risks will apply to touching a squirrel. No matter how small they look or easy you might think holding a squirrel would be, the risks of holding a wild animal can be concerning.

If you’re feeding a squirrel and the squirrel comes very close to you as it’s friendlier to you than before because of being fed, and you think holding it is a good idea as it’s friendly now, you might grab it.

The squirrel will most likely panic, and it will scratch you in the process. No matter how much a squirrel has been used to being close to you and depending on you for food, it’s still a wild animal that hasn’t been picked by hand, so it’s not used to being grabbed by people. Hence, its initial reaction to being grabbed will be panicking.

If you’ve given a squirrel food once or twice, it will most likely remember you as a trustworthy source of food, and if you have one consistent spot where you sit and feed squirrels, for example, in a park, a squirrel will come to you asking for food.

Squirrels are very smart and are intelligent animals. Squirrels have been used to being around humans and having them near their habitats so much as humans encroached on their habitats.

Giving them food consistently may get them dependent on you for their source of food, which can be risky for the squirrel, and you both, as squirrels are wild animals, and their behaviours aren’t the same as your pets.

Should You Feed Squirrels?

Yes, you can feed squirrels if you wish but it’s worth noting that once you start feeding a squirrel they will regularly return to your garden to be fed.

What Can You Feed Squirrels?

You cannot go wrong with nuts and seeds. Squirrels are well-known for loving nuts and we’ve compiled a full list of the nuts they like here.

A squirrel feeling threatened, or agitated may attack you, your pets, or your children. Squirrels also might have diseases or parasites with them, and they might also carry rabies.

A squirrel that has rabies will be feral towards people and might attack. Animals with rabies often get aggressive and territorial towards people, even if they’re normally calm and harmless.

Squirrels look cute and fluffy, so you expect them to be harmless and friendly animals which most of the time they are. Squirrels are friendly and get even friendlier once you start feeding them.

They’re used to being near people, and if you feed them, they think of you as a trusted source of food.

Squirrels have an amazing memory, so if you feed them, they’ll remember you as a food source they can depend on the next time they meet you.

No matter how friendly they are, squirrels still are wild animals and can be dangerous if they feel threatened or agitated, they have sharp claws, and for this reason, it can be risky to touch or pet them.