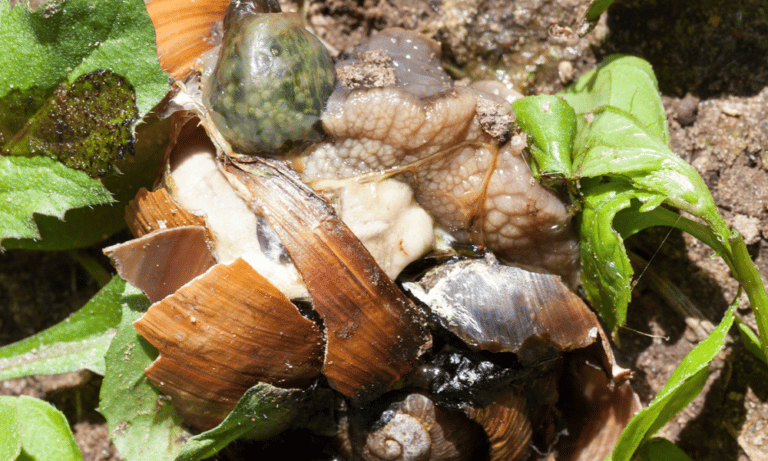 Suppose you’re taking a late-night stroll in your garden then suddenly, you hear a crunch… Turns out, you’ve stepped on a snail! But what happens to it? Do snails die when you step on them or not?

If you step on a snail, it will get crushed and die in most cases. If they only received a crack in their shells, they may survive.

A snail’s shell is a strong hard covering on its body; similar to our nails, it makes up a huge part of its body. Snails are born with their shells. Their shells are soft at first then harden as the snail starts growing.

Their shells are strong and durable, but this is against natural predators. Unfortunately, a human boot crashing down on them is not something they are adapted to fight against.

Although it is not 100% lethal, chances of survival for the snail are rare, and often, it gets crushed and dies instantly. In a fight between a human foot and a snail, the foot will always win!

What Happens to a Snail When You Step on It?

Their shell is strong and protects their soft, fragile bodies. However, a snail shell has limits and can break if a large animal or human steps on it. The shell is designed to protect snails from natural predators in the next rung of the food chain… Not humans!

If you were taking a stroll in your yard and suddenly heard a crunch sound like something hard broke then you’d probably find the remains of a slimy garden snail.

Snails often die when someone steps on them. Sometimes, if their shells are cracked, chipped, or there’s only a small hole, but the rest of the shell and snail looks alright, then chances are that the snail will survive. Unfortunately, a foot is going to do more damage than this!

The snail can survive if the shell is split into two pieces, but some of it is still covering the snail’s soft body.

If the shell is shattered or doesn’t cover the body, it will kill the snail because snails cannot survive without their shells as it’s a part of their bodies, and they’re very dependent on them.

Do Snails Feel Pain When You Step on Them?

However, suffering is questionable, and there’s not an exact answer to whether they suffer or not, as animals with simple nervous systems cannot process emotional information.

What a snail feels as pain isn’t necessarily the same pain humans experience. Instead, a snail will simply know that something negative is happening.

Do Snails Have Feelings?

Snails do not have feelings that humans would recognise. This doesn’t mean they have no feelings, however. They can feel a type of pain, hunger and fear.

No, snails do not cry when harm is inflicted on them or when they feel sad. Simply put, they do not have tear ducts to produce tears.

Can Snails Survive Without a Shell?

A snail’s shell is more than just aesthetic that makes the snail look unique. It also protects the snail from the many predators that eat snails and protects it from harsh weather conditions.

The shell is a necessary part of the snail’s anatomy. It’s also not only for protection but is an essential part of its life and wellbeing.

A snail’s shell has many uses for the snail besides protection, it regulates the internal temperature of the snail, and it stores water and minerals that the snail requires for nourishment.

When a snail’s shell is damaged, the snail will get weaker and die. Without protection, a snail cannot survive predators, extreme weather, and dehydration. This is why a snail’s shell is of the utmost importance for its survival.

Can Snails Fix Their Shell?

If the damage to a snail’s shell is minimal, it will try its best to fix the shell and eventually recover and heal it.

A snail’s shell is made up of calcium. Snails can produce more calcium to patch up minor cracks and holes. If the entire shell is crushed – as if often the case when someone steps on them – then there is no chance of fixing the damage..

If the damage is too extensive for the snail to recover, it will struggle to survive because the shell offers protection from the elements and ensures it has enough moisture to avoid drying out.

Ultimately, without a shell, a snail will dry out and die (and no, a snail doesn’t become a slug when it loses its shell).

Several animals in the wild have protective coverings to shield themselves from dangers such as predator attacks and weather. Similarly, snails have shells that protect them from drying out, predators, and harsh weather and maintain their wellbeing.