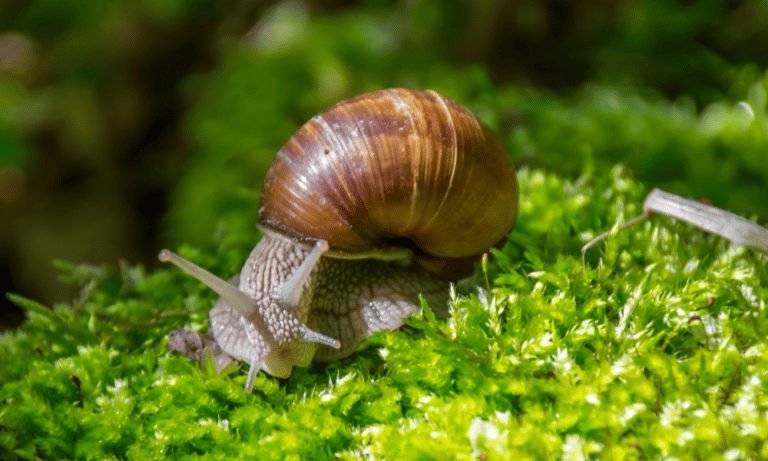 If you have a garden and have noticed a snail, you’ll know that it doesn’t have the fussiest of diets. It will slowly work its way around your garden, eating pretty much everything. But, does this include everything? Do snails eat moss too?

Snails eat moss, but it depends on the type of moss. Snails only eat live moss as it’s easier to eat, while they ignore dried moss because it’s difficult to digest.

Moss is one of the food items that snails love feeding on, but they won’t eat all kinds of moss. Moss comes in two types, live and dried moss.

Live moss is the moss that continues to grow and has moisture present in it, making it softer. Dried moss is essentially dead and decaying. You know when you see a clump of moss that has dropped from your guttering or roof – this is dried, dead moss that snails will avoid.

Snails only eat live moss as it’s soft, so it’s easier to chew and digest. Snails avoid dry moss as it’s hard and not soft like live moss, making it difficult to digest and break down.

Snails can get sick or die if they eat dried moss. It will essentially clog them up. They need moisture for digestion.

Can You Use Dried Moss to Deter Snails?

No, dried moss won’t deter snails. They will simply ignore it and move on to something else they can eat. You need to use other deterrents to get rid of snails such as copper tape, some mulch or nematodes.

Is Moss Good for Snails?

Moss is a good food source and has many nutritional benefits for snails, making moss a very healthy food for snails.

Moss provides snails with several useful and necessary vitamins and nutrients to keep them healthy. Moss has a lot of moisture which is necessary for snails because they need higher humidity levels than most insects.

It’s why they’re as slimy as they are, of course!

Moss is also good for calcium which is very important for snails as calcium maintains and develops a snail’s shell.

Other moss types also contain several more nutrients that are very healthy for snails, such as iron, copper, zinc, manganese, selenium, and iodine.

It’s as if moss is a superfood for snails.

Moss is a necessary part of a snail’s diet as it contains several necessary vitamins, minerals, and nutrients that are beneficial for snails.

If you have moss growing somewhere then, chances are, you’ll have snails hiding amongst it.

In fact, we’d go as far as to say that one way to deter snails from your garden is to remove any moss that is growing. You’ll often find moss growing on cool walls, on shed rooms, around planters and pots and beneath trees.

If you’re suffering from a snail infestation then you may find snails hiding in the moss so try to remove as much of it as possible. There are, however, benefits to moss in the garden you ought to be aware of before you go ripping it all out though.

Can Snails Move on Moss?

Snails can move on moss and even sometimes lay eggs on it. Moss is mainly a food source for snails. They will happily eat lots of it though they will ignore it and move over it if it’s dry moss.

Do Snails Live in Moss?

Snails can be slimy, weird-looking creatures, but several people still find them cute, so cute that they take them to their homes as pets or look after them in the garden.

Snails can eat several things, and moss is one of them.

Snails eat moss, and it’s very healthy and nutritious for them. Moss doesn’t deter them and instead provides them with the moisture and nutrition required to stay healthy.

Snails avoid dry moss, but still, it doesn’t deter them.