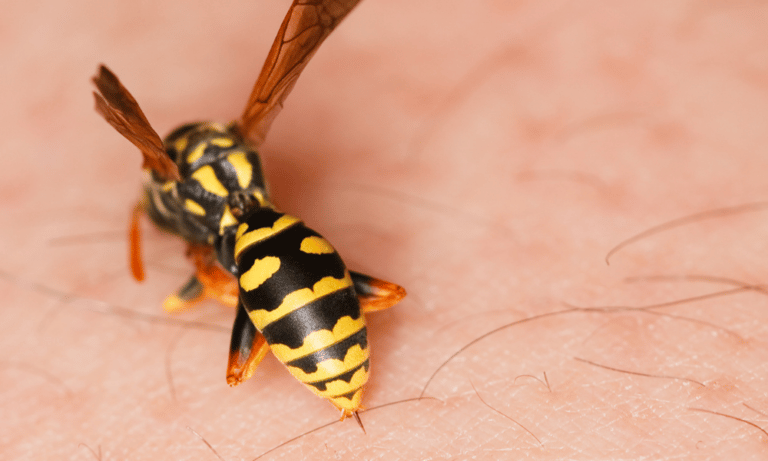 Wasps have earned a bad reputation for being aggressive, and dangerous insects. Despite their aggressive behaviour, they’re very beneficial to the world. Wasps help the environment in many ways, so they aren’t just angry stinging insects, but why do wasps sting if they’re so helpful to the world?

Wasps use their stings to kill prey and defend their territory and nest. They use it to defend themselves and sting humans because they think of us as a probable threat.

Wasp nests are often found in man-made structures, for example, in the corner of a wall, somewhere on the roof, as well as in trees in your garden.

They can nest anywhere, so people often come across nests without seeing the actual nest. There are two types of wasps, solitary and social. Social wasps especially are very overprotective of their nest.

They sting any animal close to their territory and colony housing homes. This works the same for people, and if they sting you, they’ll release pheromones that will alert other wasps, and a whole swarm will soon be after you. Solitary wasps rarely sting unless they’re roughly handled.

Why Do Wasps Sting for No Reason?

The chance of being stung by a wasp without any plausible reason is very rare as wasps sting someone only when they feel threatened or if someone or any animal is near their nesting area.

As wasp nests are often close to where people live and work, there are a lot of interactions between wasps, and they most often always end with the person getting stung.

Solitary wasps don’t sting often, and they might only sting someone if they’re very roughly handling them. Social wasps are often the more aggressive type of wasps that will sting you or any animal, including your pets, if they or you get a little too close to their colony and nest.

Wasps release pheromones, and as mentioned earlier, it calls other wasps from the colony to help out. There’s mainly a reason if a wasp wants to sting you.

What Happens to a Wasp When They Sting You?

Nothing happens to a wasp if it stings you, unlike a honey bee who gets fatally injured and dies soon after stinging someone. This happens because honey bees have small barbs that can hook into the skin after stinging.

The bee’s abdomen has weak attachments, so if a bee pulls out the sting from the skin after stinging someone, the whole sting rips out from the bee’s body, including its vital muscle systems around its sting.

The sting remains stuck in the skin of the person. The bee’s venom gets used up in this sting and can’t be used again as the bee doesn’t have a sting anymore.

This is different with wasps as wasp stings are smooth and can easily pull out from whoever they’re stinging.

Due to this, a wasp can sting multiple times, and not only this is different from bee stings, but a wasp can also use its venom in different stings, and if it runs out of it, it can make more.

How to Avoid Being Stung By a Wasp?

Several things lure in wasps to you, such as sweet smells and bright colours. These things don’t agitate the wasps or make them want to sting you. But, what happens is these attract wasps to you, you get annoyed by the wasp, flap your harms and that agitates the wasps.

So, how can you avoid attracting and then getting stung by wasps:

Wasps are aggressive insects, but their aggression is not without a reason. They’re only overprotective about themselves and their colony and nest. A wasp won’t sting you without a reason, but it often seems that way because wasps are easily threatened, and if you go even a little near their nest, they’ll come out to sting you.

When a wasp stings you, it doesn’t hurt it, unlike a bee sting, which takes its toll. Due to this reason, wasps sting multiple times and utilize their venom each time they sting. It’s best to avoid fragrances and colourful clothes while you’re going outside in a wasp environment, so you don’t attract any wasps.